The Importance of Art in Dementia Care

This presentation was made by Michael on June 30, 2019, at the Evanston Art Center in Evanston, Illinois to an audience of +/- 50 people. There is a slide show taken during the presentation. Photos by Jake Bloom and Jan Yourist. 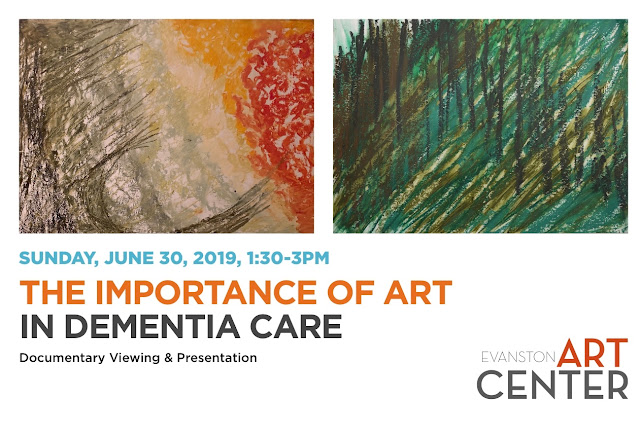 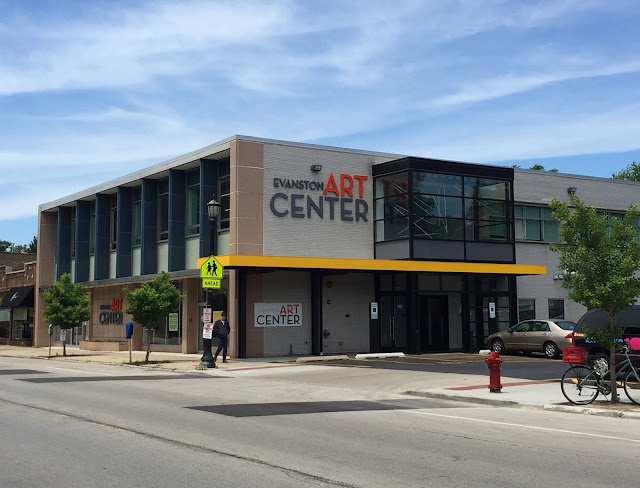 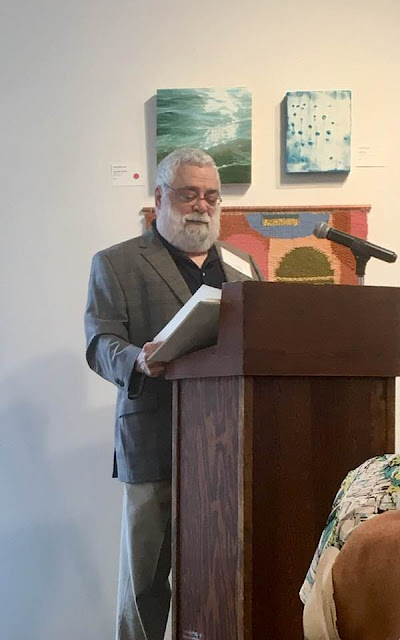 The Importance of Art in Dementia Care

Dementia, one cause of which is Alzheimer’s Disease, is not just a memory problem, like many think. It includes cognitive issues as well as physical, mental, physiological, psychological, social, emotional, and medical … and is complicated by the many ways in which it expresses itself, usually different for each person affected!

As the disease progresses, a person’s abilities, behavior, and needs change. As a person with Dementia’s abilities diminishes, it becomes more difficult for them to lead active, productive, meaningful lives. It becomes more difficult for them to engage with people and with their environment. The hours and days are very long and lonely when there is little they can do to fill their time. This can cause unrest, nervousness, boredom, and depression.

Those living with Dementia, like most everyone; need to continue to be active, productive, and involved with life. THE ARTS can help provide for these needs. It is especially important for people diagnosed with Dementia/Alzheimer’s who have been artistic all their life.

ARTS, in general, refers to the theory, and physical creativity found in human societies and cultures.   Major types of the arts include literature (including drama, poetry, and prose), performing arts  (among them dance, music, and theater,)  and visual arts (including drawing, painting, filmmaking, architecture, ceramics, sculpting, and photography.)

Today I am focusing on Visual Art, however, all of the arts can help to improve the life of a person with Dementia. As their ability levels change; successful art projects, independently or with support from others, can still take place. These activities can range in complexity from painting a “masterpiece,” to “simple coloring,” to helping create decorations for a holiday party.

The following is GREGORY’S  ARTIST STATEMENT as written by Michael due to Gregory's failing use of language but taken from stories he told Michael over the years.

“I guess that I have been artistically creative all my life. I was born on July 4, 1948, How creative is that?

“As a very young boy, sitting at my Grandfather’s feet while he rocked and smoked his pipe, I built cities using Grandpa’s boyhood Anchor Stone Blocks. I attribute my career in architecture to my grandpa and those blocks!

“As a young boy, I made rings and bracelets using Indian Seed Beads on a loom,  while sitting on a pier post, way out in the water of Lake Michigan, with my family just in out of sight working on their sailboat.

“When I was eleven I designed and built a complete paper mâché Nativity with the usual cast of characters.

“In my pre- and teen years, as well as an adult, I sketched a lot. I designed on paper, complexly authentic period buildings … which my mother said was idle-play because “no one build’s houses like that anymore.

“She was proven wrong when, as an adult architect, for a client, I designed and built a five million dollar authentic reproduction turn of the century French Chateaux in Denver.

“As an architect and interior designer I used my art skills in many presentations to clients.

“In 2010, when I met Nancy Rosen, whose mother Eileen lives in our condo building, there was an instant connection. Nancy, an amazingly prolific and talented oil painter took me under her wings and I began to develop my latest art form, working with oil sticks.

“The paintings are on Stonehenge Paper that has been roughly gessoed. I begin each piece by studying the rough surface of the paper in silent contemplation until it “speaks” to me. Then I begin to paint and do not stop, nor look at the work from afar until I am finished with the piece. I automatically know when to begin and when to end a piece.

“My work is abstract and shows broad, usually colorful strokes while at the same time I pay attention to detail. The ideas just seem to come from with-in, I know not where exactly.”

“If you think you see a forest, or a landscape, or an animal … that is in your imagination, it is not necessarily what I painted.

“With Nancy Rosen, as artist/teacher/mentor/and friend, in a little over two years, I created close to 100 works of art. I am grateful to her!

At each show, many of his works sold, whether because of their artistic value or because the people in his life wanted a piece by which to remember him. Either way, it made him feel good to sell a piece and to share his art.

It is said of Alzheimer's that new learning connections become difficult to make,  but Gregory succeeded in making new connections with his new oil stick art while the old connections failed.

It might be said that Gregory was an “Outsider Artist” without formal artistic training, at least no training or experience in painting with oils.

But I have to believe that his past connections with art helped, including his education and experience in architecture and interior design; his creative nature, eye for color, and awareness of scale; as well as his maestro-level abilities in classical music on the piano.

His work, for the most part, is abstract so it seems to come more from the pure intent of his heart rather than from his intellect or mind. He never sat down with the intention of painting something in particular. It just flowed onto the paper.

As Nancy Rosen has said, "Art works well here because LANGUAGE is not necessary." This was so important to Gregory.

Gregory often told Nancy that she gave him a “Whole New Life.” He always looked forward to what he called his “play-day” at Nancy’s studios.

We often referred to her as “Gregory’s Art Angel.”

In MUSIC, they say that the baton is like an extension of the director’s body. It flows the music from the director’s mind into her arm into the air around, to be picked up by the orchestra musicians.

Using oil sticks, colors are applied directly to paper, can be over-colored, or smoothed, blended, and diluted with terpenoid.

Nancy would demonstrate and Gregory would imitate. In this way, new learning was easier for him.

Nancy would make a suggestion on how he could proceed and Gregory would follow through … or ignore her. Nancy was always good-natured with him, an excellent teacher.

A number of themes, of which Michael did the labeling, did seem to develop: landscapes,  diagonals, arches,
stripes, circles, tunnels with white light at the end, feathers, and more.

When selecting color palates, with Nancy’s help, for that day’s work, he would have color preferences which he favored for weeks, then suddenly change saying,  “Yuck, I can’t do green anymore!”

Gregory was proud of his new abilities, his new hobby, his new art. Once when we were going to a friend’s birthday party he asked if he could take along some of his paintings to show people. I encouraged him saying, “You don’t want to take the attention away from the birthday boy, do you?” He understood.

Whenever people would visit us at home, he would take them by the hand to show them his new work which was hanging all over the condo, especially in the guest bathroom in which his paintings hung wall to wall, ceiling to floor and even in the rarely used shower stall!

In addition to the oil sticks, he tried to work on collages but found cutting and collecting and keeping track of pieces overwhelming. One afternoon while sorting images to use for a drawing he had a panic attack. I was able to talk him down but that was the end of his collage work.

At home, we tried and succeeded in working with Sumi ink. He studied calligraphy by trying to copy pictures from a book we purchased.

He worked with colored pencils and Mandala designs. In the beginning, he did not like them and compared them to children coloring books. I suggested he be creative and alter the patterns by coloring outside the lines. This got him excited.

All of Gregory’s attempts at art fit very well within the confines of his progressing Dementia. Towards the end, at the risk of insulting his intelligence, we even tried colorful finger painting, which he didn’t seem to mind trying.  However, that did not work well since by that time his eye and hand coordination no longer existed.

He loved looking through books with art from the masters, studying them in detail for hours at a time. He continued to enjoy looking at his artwork which filled his room at Lieberman and we would often talk about the good times at Nancy’s studio.

ART gave Gregory a sense of purpose and accomplishment and pride during a time when so many of his other abilities were disappearing.

I will be forever grateful to ART for the joy it brought Gregory during his lifetime and to helping him actively fill his time. I am forever grateful to Nancy for so gently being his friend, teacher, and mentor during the last five years of his life.

Posted by Michael Horvich at 11:26 AM

Email ThisBlogThis!Share to TwitterShare to FacebookShare to Pinterest
Labels: Alzheimer's, Evanston Art Center, The Importance of Art in Dementia Care