The Sorrows of Sudden Death

This morning when I slid open the balcony door, coffee in hand, I immediately spotted the two bodies lying on the concrete, dead. Both dressed in yellow with black collars, they were lying just at the edge of the balcony where the concrete extends from the railing. What had happened? And why both of them, together? Was it a suicide pact? Had one died and the other followed through grief? Had they both caught a fatal cold due to the weather change? We will never know. But the questions will linger for while longer as I mourn their death. 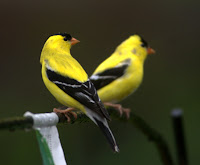 Posted by Michael Horvich at 9:19 PM