A Brief History (names changed to protect whomever :-)

When Gregory was in graduate school at Harvard, he took a studio class with George Nelson, who was quite a famous designer of furniture and accessories etc. Gregory’s studio partner was a man by the name of Bob. Bob and Gregory had a very close relationship, Bob married and had two children then came out gay. Gregory married Beth and had Paul as a lover (his wife knew Gregory identified himself as a bi-sexual man.) If Bob had been out sooner, Gregory and he would probably have become partners and who knows if I would have been in the picture. Turns out Bob was a fairly successful man, wealthy person but dysfunctionally alcoholic as well.

In later years, Bob made arrangements several times to meet Gregory for coffee when he was in town and then stood him up. Never heard from him for many years. Then recently Bob contacted Gregory's head architect associate from GMA Ltd via the old website. Bob was told Gregory had died, was given my e-mail. A month went by and just recently I got a facebook message saying “Just found out today that Gregory died.” So with Bob, I guess the lie goes on. (But I digress.)

Gregory tells the story of a famous bakery in his Boston neighborhood and their specialty cake a “Mozart Torte.” Maybe named after the composer or maybe the composer’s favorite pastry, either way it was Gregory’s favorite as well. When Gregory and Beth left Boston, the two old maid sisters who ran the bakery gave them the recipe as a farewell gift asking them to not share it with anyone.

It was a multi-layered, hazelnut flour, dense cake with alternating chocolate moose and dried apricot puree between each layer. Once the five or six layered torte was assembled, it was placed on a wire rack and a chocolate ganache was gently poured over the top until the entire pastry was encased in a smooth, shiny, delicious cover. Then a dried apricot would be artistically sliced and placed on top with a few whole hazel nuts to finish the masterpiece.

Barbara shared the recipe with Bob's wife and the wife had the nerve to enter it in a New York Times recipe contest saying it was her recipe, won the contest, and the until then secret recipe was named after the wife (can’t remember he name) as if she invented it! Gregory was quite pissed at both the wife for not keeping the recipe safe and at Beth for sharing it. (But I digress.)

The relationship at the time between Bob, Gregory, and George Nelson (who was dying of lung cancer) was very strong both at university and outside of it. Gregory tells a story about the three of them going out for a drink (during his Boston days) and George was so ill that he had to stop at each parking meter to hold on for support and catch his breath. (But I digress.)

The three of them were in conversations about Gregory and Bob buying George’s design studio (which was eventually purchased by Herman Miller Co. another famous design house and the designs are now worth a fortune.) George was a prolific designer and many of his pieces are now also classics. The deal fell through because George’s wife decided that she wanted to keep the firm in the family. (But I digress.)

Gregory and I were at a “Modernism” show in Winnetka maybe ten years ago (still happens each year Click here to see the show's website. (Opens in a new window.) and we came across an original George Nelson Spike Clock. The dealer probably did not realize what he had and Gregory bought it for for $60.00.

We had it professionally cleaned up and it has ticking away since. It is hanging in the living room on the wall over what used to be Gregory’s desk and is now mine. The clock has always held a place of honor in our home since Gregory purchased it. (But I digress.). 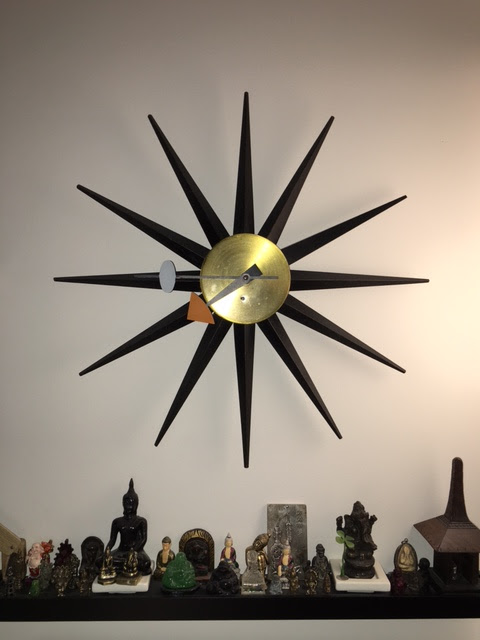 I recently searched for its value on-line and this is what I found for two similar ones : $1200.00 and $1800.00. WOW! No more digression. Just a wonderful story to tell as I continue to be the story teller of both Gregory's and my history. (No more digressions :-) 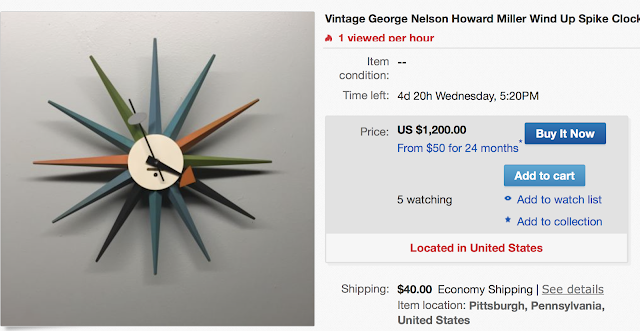 Posted by Michael Horvich at 12:04 PM