Walking down a distant cobble stone street in a distant arrondissement in Paris, I came across a narrow alley over which a weather beaten, powder blue, oval sign with faded black letters that simply spelled
M A R I O N E T T E, squeaked and waved and rusted in the breeze. 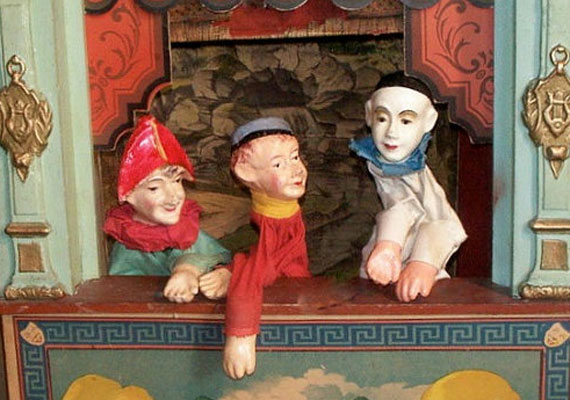 I entered the narrow, dark passageway which led to a somewhat brighter courtyard area in which there was a toy shop with its dusty, dirty, fogged window filled with objects that would delight any child (or adult for that matter.) 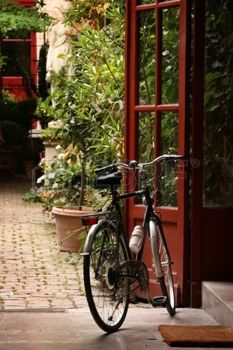 The door to the shop was open and I could see in as the aged proprietor was bent over one of his creations trying to mend the twisted and knotted strings of the handsome male dancer marionette. He looked up and noticed me noticing him. 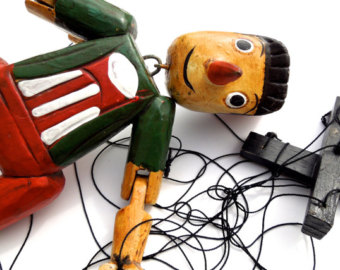 At first I felt embarrassed for spying on the old man at work but realized he did not see it that way. He smiled and with his arthritic hand motioned for me to come into the shop. He invited me to poke around at my leisure and to feel free to ask him or his wife any questions that I might have. 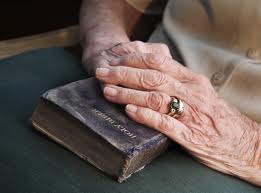 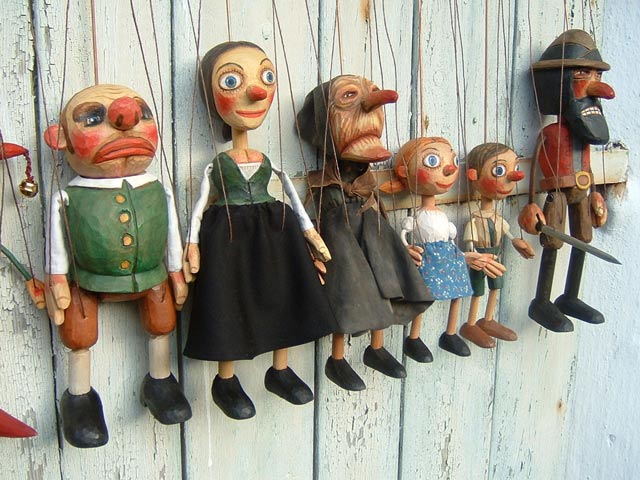 To his left was an old, abused, leaning wooden workbench covered with open and closed tins and plastic bottles of paint, miscellaneous size sticks and lumbers, assorted heads of various races, various sized and shaped tools which were made of wood and plastic and metal. 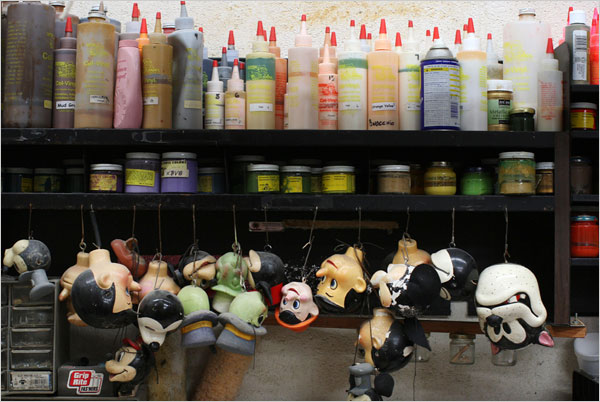 To the old man's right was a shelf filled with old, well read, well worn books. I could tell by the titles that they covered everything from making and fixing dolls to creating a clay kind of putty to use for faces, to formulas for magic spells ... but that is a different story 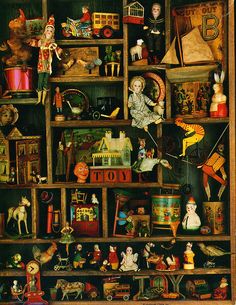 Not far from the old woman, who was working at her own table doing her own fixing and repairing and creating; was acabinet containing an unorganized, stuffed in collection of hand puppets. I leaned over to get a closer look and one of the most adorable puppy dog puppets began to move closer to me. I jumped back astounded before I realized that it was the couple's real puppy dog who was just doing its thing of settling in for a nap among the soft toys. 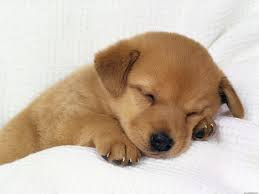 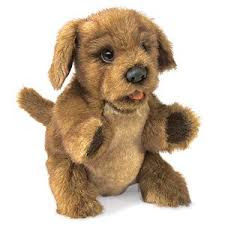 Not much conversation took place between the old man, the old woman, and me. They continued to work at their projects and I wandered around the shop investigating one marvel after another; one pile of puppets, one collection of tiny treasures, one rack of neatly lined up cars, one cabinet of furry huggable Teddy Bears, one box of colorful tops and striped balls, one marvel after another. 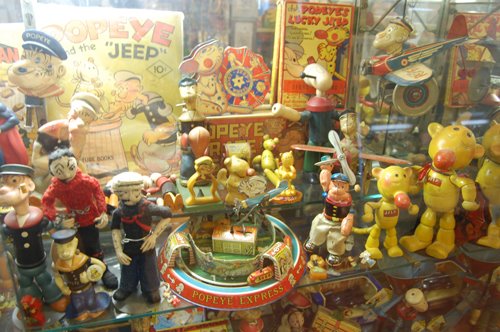 Through the open door of the shop, from somewhere in the courtyard outside, I began to hear the chiming of the clock tower. The clock first announced itself and then counted the hour at 5:00. 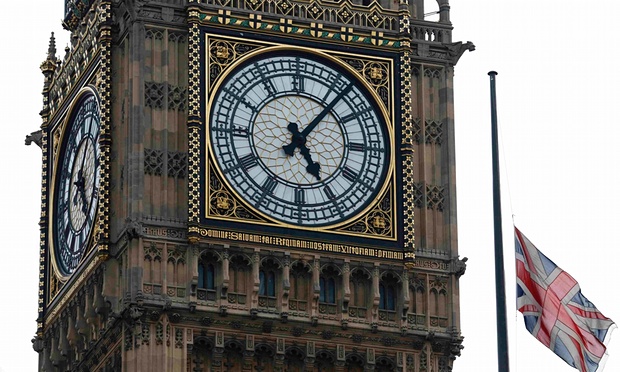 "That clock is always a little off," commented the old woman to no one in particular. The old man and old woman stirred from their separate project preoccupations and carefully, slowly stood up, stretching in place.

When they noticed me, it was almost as if they had forgotten or maybe never knew that I was in the shop with them. "Well," announced the old man to no one in particular, "Must be time for our tea."

"I guess I must be going then," I commented almost apologetically for having invaded their spaced and I began moving towards the door.

"No, no!" reacted the old woman. "You must join us for tea and some freshly baked scones. Do you prefer blueberry or raspberry? Please come upstairs and join us!" 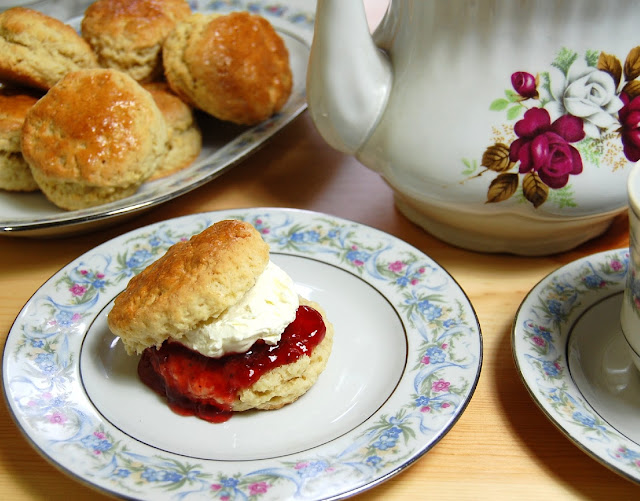 "Well, I would be honored," I replied, "I have so many questions to ask you about all the wonderful things you have in your shop and about your loving work with the toys. Then after our tea, I will pick out a few items that I would like to purchase."

"Oh my. Oh my!" they both uttered in unison. The old man continues, "Nothing in the shop is for sale you know. Did you think this was a toy shop? Well it is a shop, but not that kind of shop."

"This place here is our workshop, not a for sale shop," continued the woman. "It is where we spend our time all year making and fixing toys of all sorts. Sometimes neighbor children bring in their broken items and we try to fix them but mostly the toys we work with are for giving away to the orphanage up the hill. The children there are so sweet and so need love and attention. We spend most of our days making and fixing toys for them."

As we climbed the narrow, creaking stairway to their living quarters, the old man whispered, "If you would like to have a toy or two I suppose that would be OK. You strike me as a person, like my wife and me, who still has a lot of the child about them. Do you take milk in your tea?"

This fiction story introduced itself to me in a dream the other night. The parts of the dream which I remembered had to do with the Paris passageway, the shop, and the live puppy which I at first thought was one of the puppets in the shop. The rest I created as a writing exercise.

This is my first attempt at this kind of writing. In my mind I pictured what each step of  the story might be like and then I wrote that paragraph. The next paragraph was created after I purposefully thought about it or after an idea that just seemed to come to me unexpectedly showed up; like the ending that the shop is not really a shop. After a paragraph was written, I either searched the internet or my own photographs for an illustration.

I created the old man and old woman and in some ways I am not only the visitor to the shop but also both of the characters I created, also I love raspberry and blueberry scones! 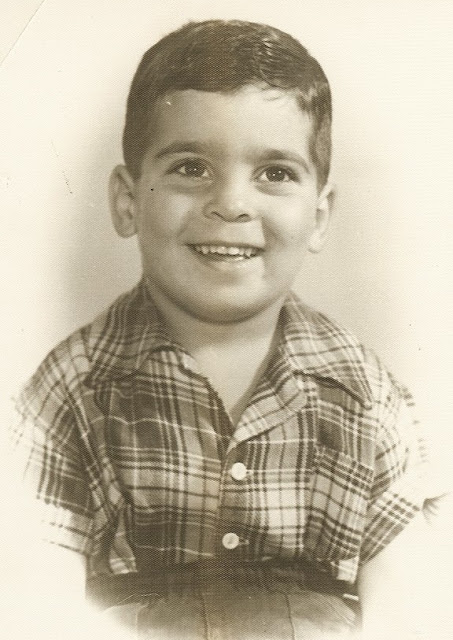 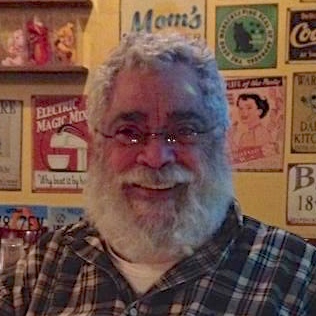 Post Script Comments: He was right about there being a lot of the child still in me! It is very apparent in my home as well as in my attitude. Check out my museum, Michael's Museum: A Curious Collection of Tiny Treasures, which has been a permanent exhibit at Chicago Children's Museum on Navy Pier since May of 2011.
http://www.michaelsmuseum.org
(opens in a new window)

Posted by Michael Horvich at 7:19 PM