ALZHEIMER'S: A Love Story - Presentation at The Residences of Sherman Plaza

Approximately 25 residents of my condo plus some Evanston friends attended the event sponsored by the condo social committee in the community room.

I made some comments followed by our watching the documentary and ending with a Q&A. A sweet table with mini-brownie bites, mini-coffee cake bites, and mini-cup cakes was served.

First, some photographs taken by Jake Bloom, followed by the text of my presentation. 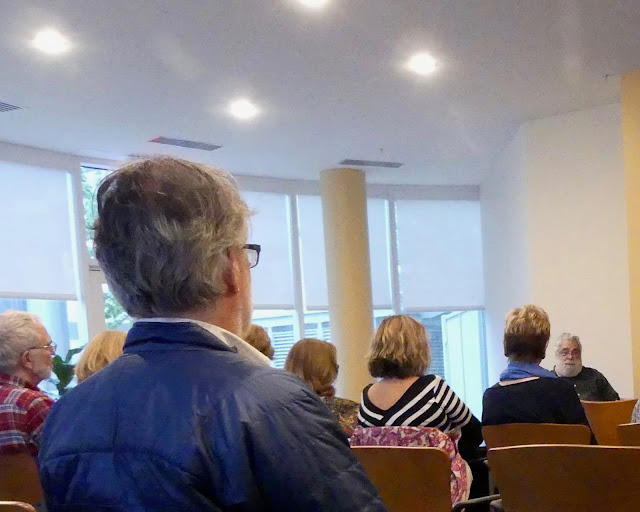 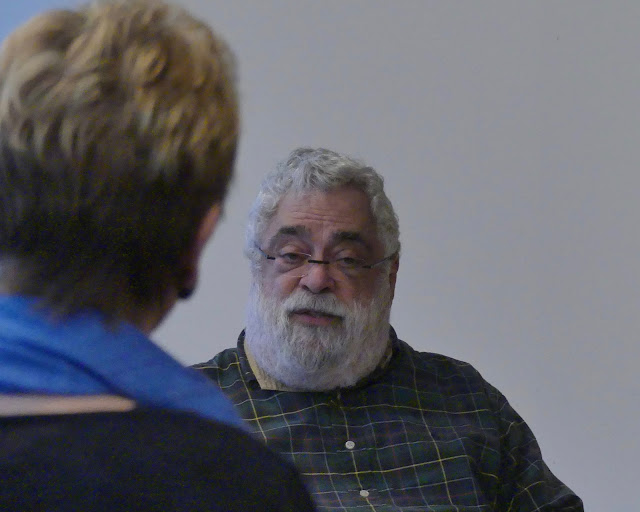 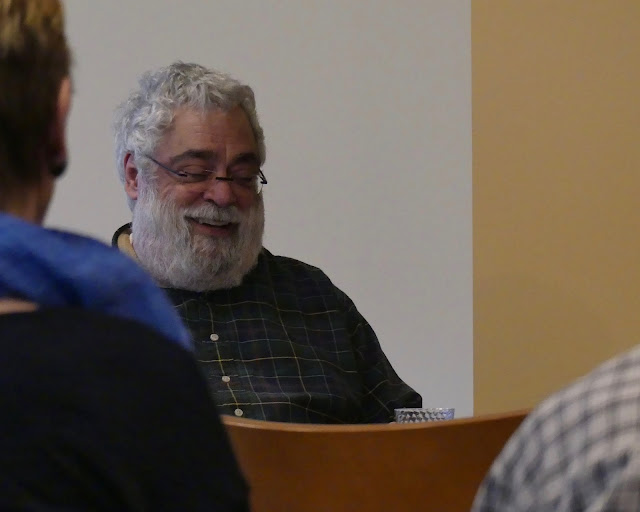 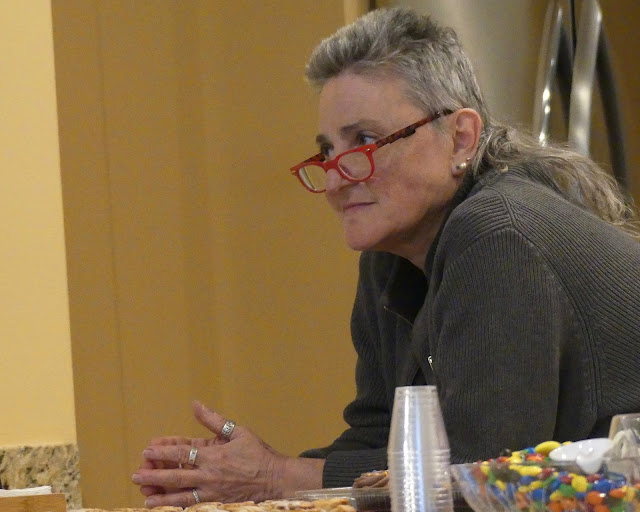 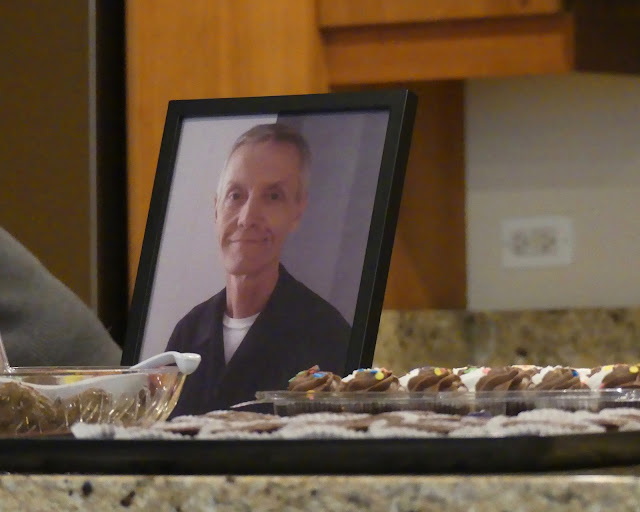 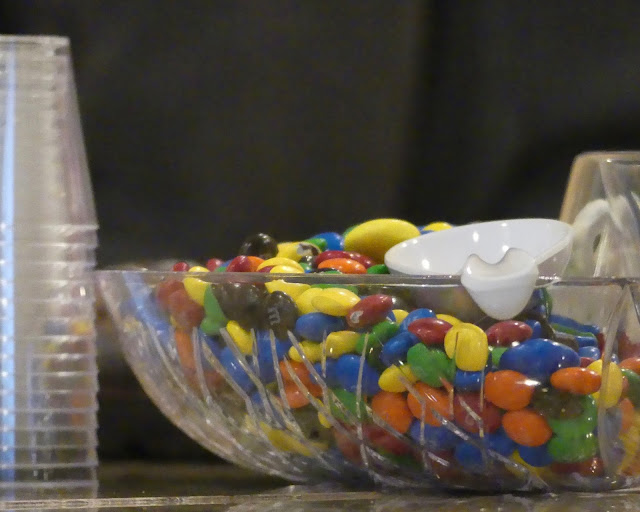 AN EVENING WITH
MICHAEL HORVICH

at
The Residences of Sherman Plaza

Over time, I have tried to describe as well as process for myself, what I went through on a daily if not hourly basis, 24/7/365.
I have used prose, poetry, memoirs, metaphor, anecdote, description, humor, and tears to try to share what it is like.
I will try to share my experience with you through five pieces of poetry I have written and then we will watch a documentary that was made half a year before Gregory died on October 4, 2015.

😃
First Alzheimer’s Disease as it relates to the theater. It is called:

A Play Told in a Series of Poems

I have written many pieces of poetry,
Chronicling the path traveled with Gregory,
My life partner of over forty-one years,
Diagnosed with Alzheimer's Disease,
When he was fifty-five years old.

For a next project, wouldn't it be interesting,
To write a serious drama for the stage,
In which the audience would experience
What a person with Alzheimer’s goes through
And what those who love him endure?

It wouldn't be hard for me to write the play,
I have so much material on which to draw.
The question is, however,
who would want to pay the ticket price and attend an evening of theater to watch it?

Who would want to sit through some ninety minutes, with one intermission of heaviness, sadness, frustration, confusion, depression, tears and at times desperation?

Even if laced with love, compassion, insight, joy, humor, and laughter,?

The Dance With Normalcy

Living with and loving someone who has
Alzheimer’s
Is like orchestrating an improvisational dance
with normalcy.

No music, no planned steps, no assigned leading
partner.
Not being able to anticipate turns or circles, or dips or bends.

Defining and redefining normalcy by the
moment … or not.
Normalcy for his dance, not mine being the key,

As we live in each other’s world,
Neither one making sense to the other.

😃
Would I be insulting your intelligence to tell you that Ménage à trois is a French term which originally described a domestic arrangement, in which three people having sexual relations occupy the same household?

The phrase literally translates as "household of three.” This poem is called:

Over twenty-nine years and their relationship was as strong as ever,
Their love continuing to grow, change, and adjust to the times.
Same-sex love was not fashionable when they first met in the 70’s.
It was known as the Love That Dares Not Speak Its Name.
Most churches do not recognize nor bless their love, their union.
Slowly society has acknowledged it out loud but for the most part still in whispers.
Each partner was very much unlike the other.

He was tall and he was short.
He was fair and he was dark.
He was slender and he was bulky.
He was a recovering Catholic.
He was a cultural Jew.
He was calm, thoughtful, and orderly.
He was animated, impulsive, and random.

Often he described him as a “stick:” meaning hard, formed, and inflexible.
In turn, he described him as a “sponge:” meaning soft, malleable, absorbing.
Over time the stick became more sponge-like and the sponge became more stick-like.
One day, years later, uninvited and unannounced, unasked, a third partner joined the relationship.
Alzheimer’s does not discriminate against same sex relationships, nor seek permission to join the party.
So it became a ménage à trois. Three entities occupying the same household.

His Illness Is All About Me!

I am his words
I am his memories

I cry myself to sleep at night
I cry silently within my soul
I feel so very sad and alone
I feel such an empty, deep hole

Now … I am his words
I am his memories
😃

My final poem this evening is based on Gregory an my extensive travels when he was first diagnosed and during the early stages of the disease. It is called:

Intersections
We wander through the meadow,
Sit on garden seats.
We walk in narrow country paths,
Traverse the city streets.

We linger in romantic cafes,
Witnessing hand in hand.
We venture to places unknown,
Revisit those we had planned.

And, now, as we travel life together,
It is at rare intersections that we meet.
The words just don’t exist anymore,
But with memories and our love, we are replete.

😃
The documentary, ALZHEIMER’S: A Love Story, which you are about to see, follows Gregory and me for a week towards the end of his life.
The documentary was done in March of 2015 by the son of Gregory’s college roommate and best friend. Gregory died seven months later.
Gabe, the son, created the documentary as part of the requirements for one of his college courses in film making at Chapman University, Dodge School of Media Arts in Orange, California.
It has been screened at more than 80 film festivals locally, nationally, and internationally. It has been shown in France, South Africa, Italy, London, Madrid, Hong Kong, Mexico, Amsertdam, Bogota, Bulgaria, Australia, Ukraine, Germany, Estonia, the UK, Poland, and India.
It has won over 35 awards including two of  the most prestigious from the American Pavilion at the Cannes Film Festival.
The message, which I believe is a beautiful one, takes Gregory and my 41 year love relationship and our 12 years of living with Alzheimer’s, and distills it into a moving 15 minute documentary.
I think you will agree as you experience the story … that the same sex couple issue … and the Alzheimer’s issue … almost seem to disappear  … what emerges is a story of any two people who love each other very much … and what happens to that love when any long term, catastrophic disease strikes.
After the documentary I will try to address any questions you may have. Now, lets watch.
😃

Posted by Michael Horvich at 10:11 PM