The other day I was shopping at the Heritage Trail Antique Mall in Wilmette (a suburb of Illinois for those of you who do not know.) After doing a circuit of the first and second floor I continued up to the third.

I enjoy visiting antique shops and do so not only locally but when out of town as well. I have gotten pretty good at "scanning" a mall booth and deciding if it is even worth moving in from the aisle for a closer look.

Some people might say, "Jaded," but somehow I can tell if it is worth spending time with a particular vendor by the way they display their items, if most items are locked up (I prefer them to be available to touch,) or if the items are even of interest to me.

Often times I will do a round of "looking" and leave the shop empty-handed. Other times I will come away with one significant item and at yet other times with a handful of tiny items (I am known for my Curious Collection of Tiny Treasures, you know!)

In a previous blog, you saw the antique Christmas Tree miniature I recently purchased from the Heritage Trail Mall. On the same trip, when I arrived on the third floor, I was dumbstruck by a pair of items I saw. This does not happen too often. I think I even commented out loud as I admired the items and circled them; commenting, touching, and amazing!

The items were reasonably priced for their value and the dealer for that booth (also the owner of the mall and an acquaintance from my many visits) was willing to give me a steep discount. The price of the items was still not inexpensive, but they were even more reasonably priced with the discount.

Lisa, the vendor, offered to put the items on hold for me and even though I had some difficulty committing to the price I figured, "Why not!" That would give me a few days to think and decide.

I began the process of decision making. Did I NEED the items or did I WANT the items? Did I have room in the condo to properly DISPLAY the items? Did I want yet another THING to which I would become ATTACHED? Was purchasing the items a good use of my MONEY? Were they really WORTH the price, even with the discount? Would the dogs, who were so heavy, literally WEIGH me down?

I spoke with my niece Colleen, who often is my Mirror of Wisdom, and sent her a photograph. She instantly fell in love with them; using words like wonderful, unique, magical, amazing!

I went back to the antique shop, purchased them, and they are currently installed on the entrance table in the front hall of the condo. There is a possibility that they will move around before settling permanently.

But I'll tell you this, they won't be moving often and certainly not on their own!

As I was drifting off to sleep, I said my nightly "Good Night Gregory." I added, "Do you think my Foo Dog purchase was foolish?" His reply was, "Of course, but what difference does it make?"

As I am writing this I realize the PUN: Foo Dog purchase foo lish? Maybe that is why Gregory chuckled.

Since the introduction of the lion symbolism from Indian culture especially through Buddhist symbolism, statues of guardian lions have traditionally stood in front of Chinese Imperial palaces, Imperial tombs, government offices, temples, and the homes of government officials and the wealthy, from the Han dynasty (206 BC – AD 220), and were believed to have powerful mythic protective benefits. They are also used in other artistic contexts, for example on door-knockers, and in pottery. Pairs of guardian lion statues are still common decorative and symbolic elements at the entrances to restaurants, hotels, supermarkets and other structures, with one sitting on each side of the entrance, in China and in other places around the world where the Chinese people have immigrated and settled, especially in local Chinatowns.


Photograh of Foo Dogs at the Antique Mall 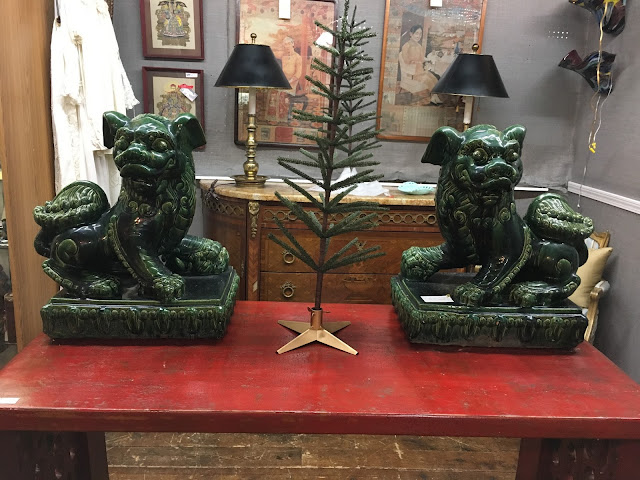 Photographs of the Foo Dogs at home
as part of my "Leaving Shrine" in the front hall. 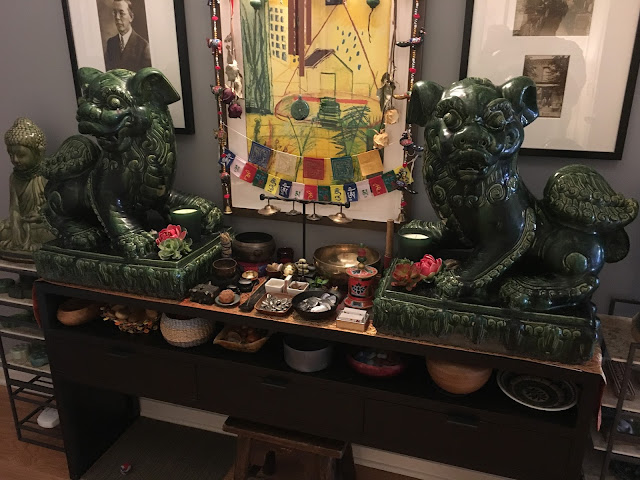 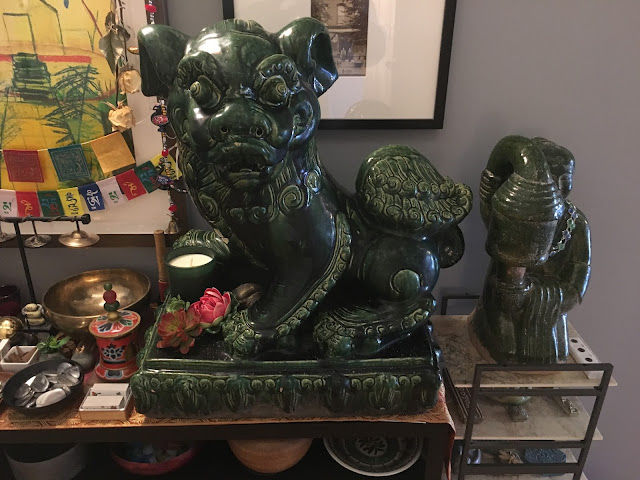 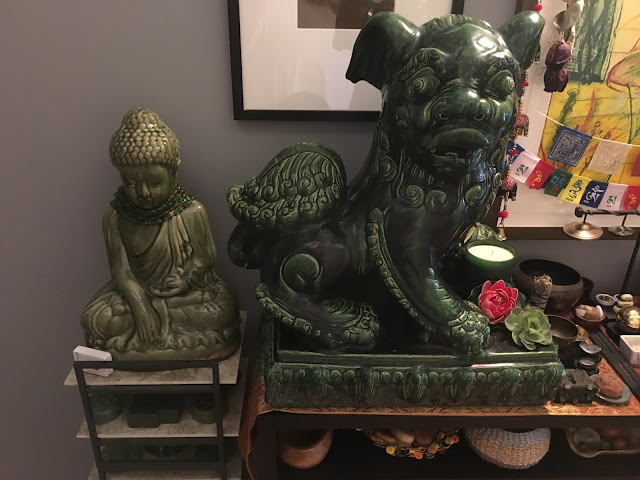 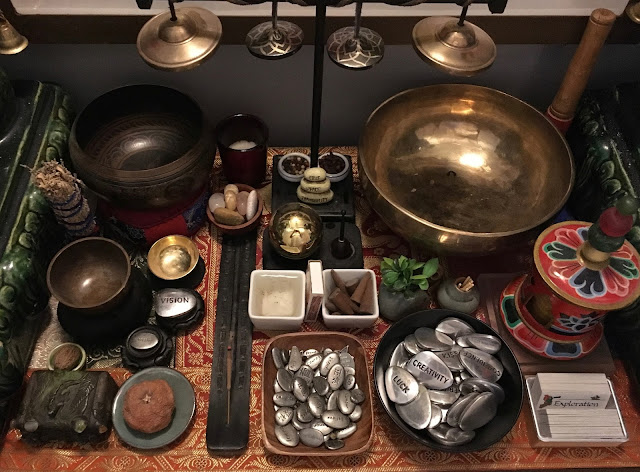 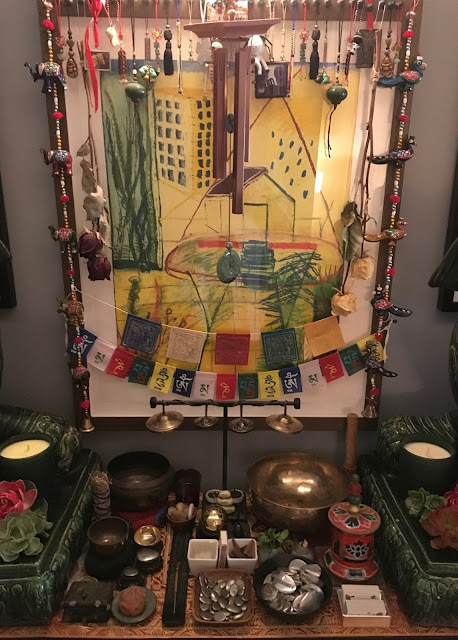 Posted by Michael Horvich at 1:55 PM