A Moment of Normalcy 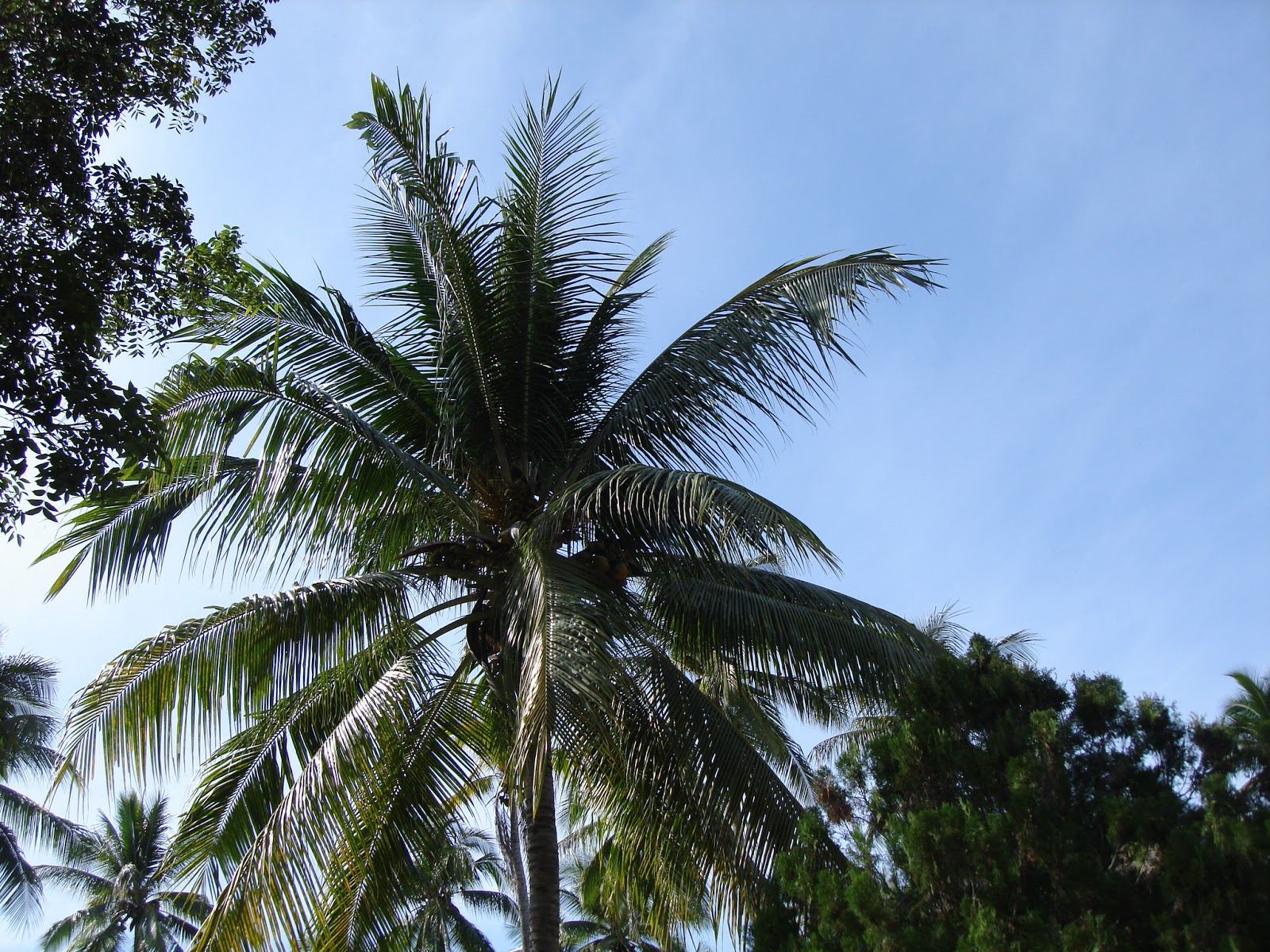 Today I took an afternoon walk out to the beginning of town at the highway and back again to the guest house where I am staying. Not to long a walk but filled with color, people, and comings and goings.

On the way back, I stopped for a cold drink at what looks like a park but is really a shack of an outdoor restaurant at the front of someone’s home (property.) 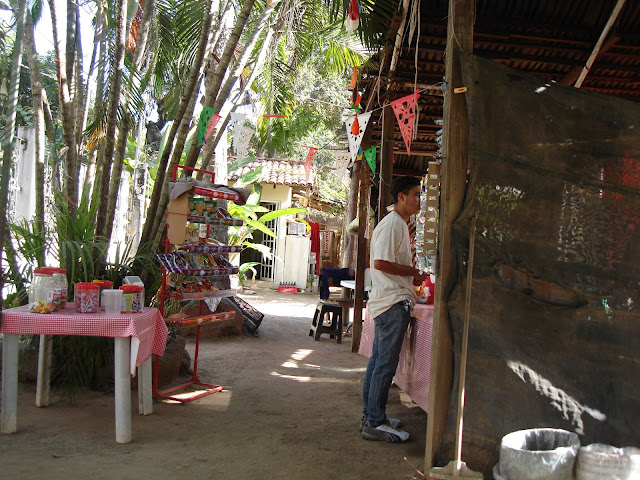 I ordered a tangerine soda with a glass of purified ice and rested from the walk, sitting at a white plastic table with green plastic chairs sitting on the dirt ground under a green vinyl tarp. 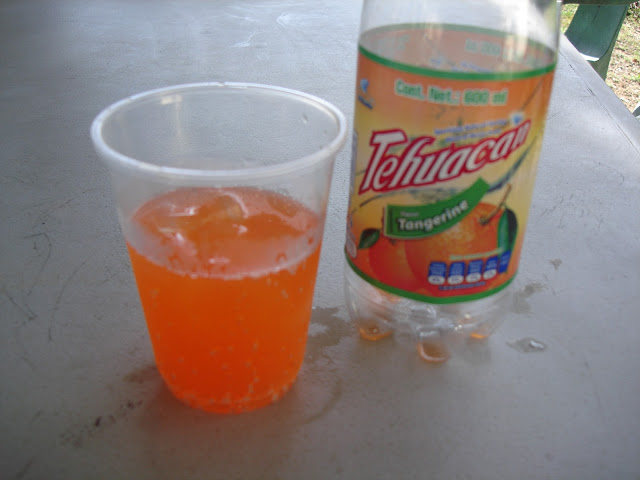 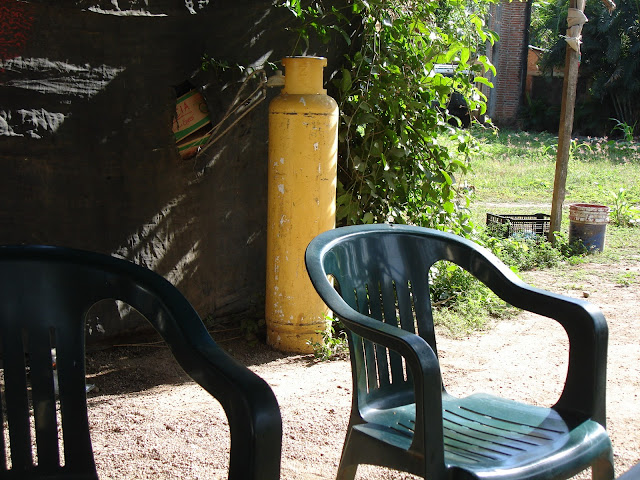 Two dogs stopped lying in the entrance to the restaurant and came over to investigate me. Offering my hand to one then the other, I asked, “Are you going to let me pet you or are you going to bite me.” The answer was a rousing (although the dogs didn’t move much and at that moved slowly.) 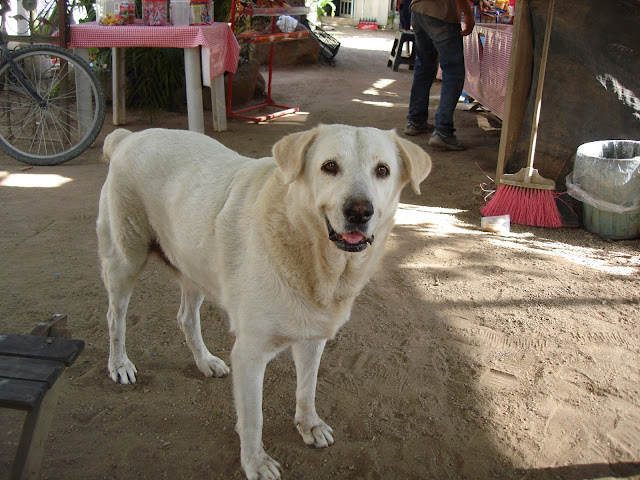 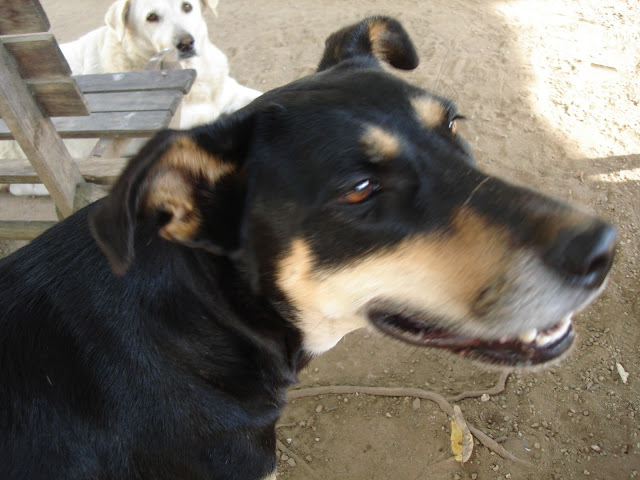 So I petted each one a short while and then realizing that I had nothing to feed them, they ambled back to their stations at the front gate.

Several people came through to buy a bag of chips or get a drink. There was a large rotisserie machine with maybe a dozen golden brown chickens doing their dance in the propane tank driven flames, their juice dripping down to the bottom of the box cooking the green onions, ancho chiles, an small new potatoes waiting there. Smelled delicious. Several people stopped to pick up a chicken with accompaniments to take home for dinner at the cost of 100 persons or $5.00 US.

I made a mental note of the chicken because they smelled delicious and how bad or unhealthy could a cooked chicken be? When asked about the operation of the owners of the guest house where I am staying, their reply was, “I wouldn’t if I was you … they do not have running water!

Now we get to the graphic part.

A young man came into the restaurant to get a sandwich and Coke. I tried not to stare but also didn’t want to ignore and look past him.

He must have been in a terrible fire. His arms were patches of scar, light jigsaw puzzled with dark. Both hands had no fingers left but rather were healed stumps of flesh.

He walked with a little limp and one can only imagine what his body must have looked like.

His face was missing both ears (although he had his ear buds in place and was listening, I would guess, to his music.) He had no hair, no eyebrows, little left of his nose, stretched brittle cheeks and chin. His eyes had what looked like refashioned eye lids and his mouth had what looked like refashioned lips done in a way that his large teeth dominated.

My heart broke, ached and at the same time it feared and revulsed. How could or should I relate to this fellow human being who had stopped by for a bite to eat? I certainly did not stare but I did not look away either.

He came over to where I was drinking my tangerine soda, the only table in the restaurant. He put down his “torta” (a Mexican sandwich made on a special French bread type roll but bulbous rather than long and graceful) and a bottle of Coke, pulled out a chair, and sat down.

I looked him in the face (read what you will into that) and said, “Buenos Tardes.” He replied in kind and asked me if I could open is soda to which I replied, “Sure” as I did so.

“Yes,” I replied as he began to eat his Torta amazingly held somehow between what he used for hands. I began to explain in Spanish that I was visiting San Pancho from Chicago where it is very cold during the winter.” He looked a little puzzled so I asked in English, “Do you speak Spanish.”

He admitted that he only knew a little, so I switched to English. He knew of Chicago with the incorrect understanding that it was freezing there all year long. I explained that during the summer it was hot like here, during the winter it was very cold if not freezing, and in the fall and spring in between some what cold and or warm depending on the day.

Amazing, here I sat carrying on a normal conversation in a normal fashion with a fellow human being who in so many ways was as normal as I was, but in so many ways, not normal at all. A monster I am sure as perceived, avoided, and feared by many.

I felt good that perhaps I had shared a moment of normalcy with him as I picked up my empty soda bottle and glass, said “Goodbye, nice talking with you.” and left past the two dogs standing (or sitting really) guard at the entrance to the restaurant. 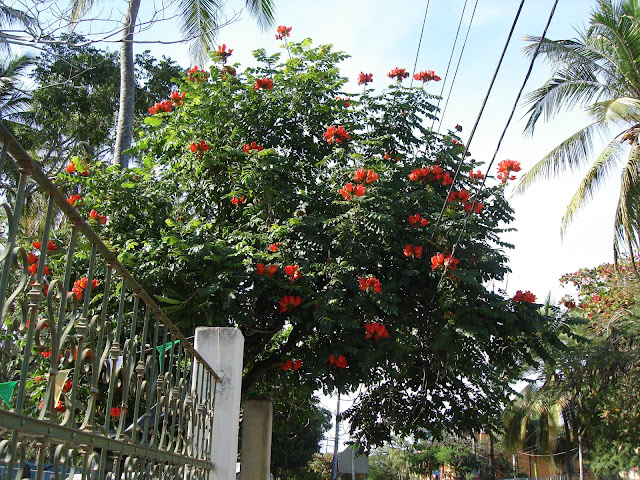 Posted by Michael Horvich at 9:03 PM