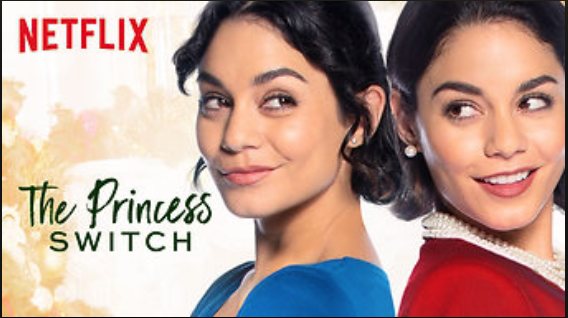 Last night I watched "The Princess Switch." Place: Chicago and Monrovia (fictitious kingdom.) Time: Current just before Christmas. Characters: One woman, a pastry chef in Chicago invited to participate in a Christmas Cake Contest in Monrovia. The soon to be Princess. One male sous-chef and one prince. One daughter of the sous-chef. The Royal Family.

Not really giving anything away, but the two women run into each other and it turns out both women look exactly alike. They trade places for a few days so the about to be newlywed can have one last adventure before having become and behave like a "Royal."

Nothing really heavy, a romp, and free on Netflix Prime. But I really got involved with the concept and found myself wondering why. First what "caught" me was that the movie takes place at Christmas time in Chicago and Monrovia, and as you can imagine, Monrovia was a most amazing, beautiful, winter and holiday decorated place to be.

The second catch was that one of the women was a pastry chef and as you know cookies, pies, cakes, etc are my major weakness ... especially at Christmas time!

Turns out, this old man (me,) who has had the love of his life in Gregory, who does not want or need another love relationship, who in many ways has led a successful productive life, and who doesn't want for anything material; found himself  identifying with the woman who got to be "Royal" for a few days and the results which followed.

Being Gay, I did not want to be a woman but wanted to be swept off my feet by the handsome prince. Also, the idea of suddenly being able to be something so different from what I could ever be, the magic of it was scintillating!

More money then you could ever need, such beautiful living space and surroundings, so many people attending to your every need, being admired by so many others, being able to have whatever you wish, and in the case of this movie being able to do such good for others in a magnanimous way were all part of my enjoying and being moved by the film.

I would guess everyone, at one time or another, would like to be in someone else's shoes but still, it amazed me that I was so involved with the fantasy and often on the verge of tears!

Posted by Michael Horvich at 11:06 AM