As we arrive at the fourth anniversary of Gregory's death, after living 12 years with Dementia which was most likely Alzheimer's, I celebrate by posting two items. One from Pat and one from Jan, both best friends to Gregory and me.

First, Pat articulately and eloquently sums up how I lived through walking the Alzheimer's Path with Gregory. One doesn't "do good" to be patted on the back but it does feel good to be acknowledged. I miss you, Gregory. Together we did a good job. Thank you, Pat. 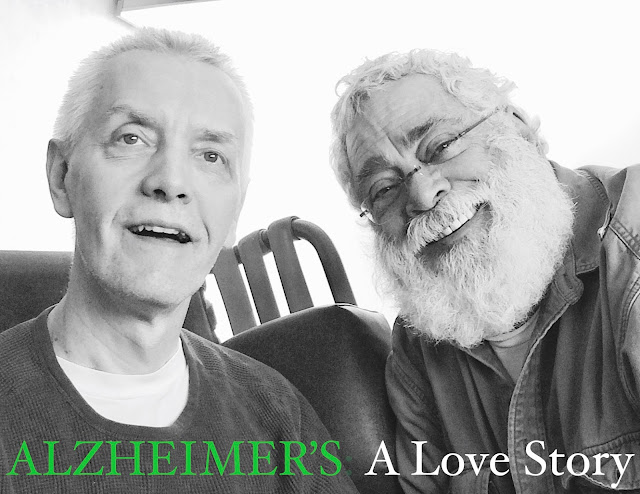 It's about time I tell you what I think of you. I've been saying it to other people, and it's past time to say it to your face.

This is not about your sense of humor, your collections, or your creativity. It's about your conduct as your partner of 35 years declined, from your soul mate to a manageable concern to a 24-hour caretaking job. This is about how your expectation of retirement companionship deteriorated to silent meals and bathroom supervision.

What I want to talk about is your unwavering love and devotion. Your resilience. Your composure, most of the time. Your acceptance, without hope. The management of your own frustration and disappointment.

When Gregory became confused about dressing, you labeled, and then later laid out his clothes. When he couldn't figure out how to plug in his shaver, you put arrows on the cord and the outlet. You engaged all your intelligence and creativity to help him. In private, you mourned each lost ability, in raw comparison to parents celebrating a child's milestones.

When those accommodations failed one-by-one, (or sometimes faster,) you supervised. When supervision didn't work, you did it. You demonstrated tremendous resilience as you devised ways to preserve whatever dignity and independence Gregory still had. You were, and are his touchstone. YOU are the one he looks to for comfort, stability, and anchor.

You've always been open about your feelings, and never critical of my questions. Once I asked you, how long could you do this? Your response struck me and stuck with me. You said, "I have the time. I don't need to go anywhere and I can take Gregory with me if I need to run an errand." You were saying, why not care for Greg at home indefinitely. I don't think I could ever be that generous.

But one day, that wasn't enough. One day, Gregory was not calm and compliant anymore, but agitated, unspeakably sad, and lashing out. Thanks to your preparation, you did not panic. You found him a place to be where he is comfortable. Now he is calm and happy again. Nothing about you changed. Gregory changed.

Through all of this, you cared for your extended family and friends too, by keeping us apprised, at least in broad strokes, of what to expect. You communicated your strong sense of what you need—support, acknowledgment, privacy, no need for suggestions. You never acted the martyr; just laid out the facts. You cried in your pillow at night.

I am honored that you include me in your circle and I don't know what I do to deserve it. I do know I need to reflect on how I can be more like you.

I've told my children, a good friend should be someone who makes you want to be a better person.
I can only aspire to be in a relationship like the one you had with Gregory. Because of your example, I am trying to be more patient with my family. I am trying to make more time, take more time to think about how I can help them. I am trying. Your influence improves my world.

You may not be a saint—but you may be a minor angel.

Next, one of Gregory and my most long time friends Jan wrote this searching, moving post about Gregory's passing. It is a must read about the sacred space Gregory created in his dying and the lessons and love he gave us in his last days and hours. Thank you Jan. 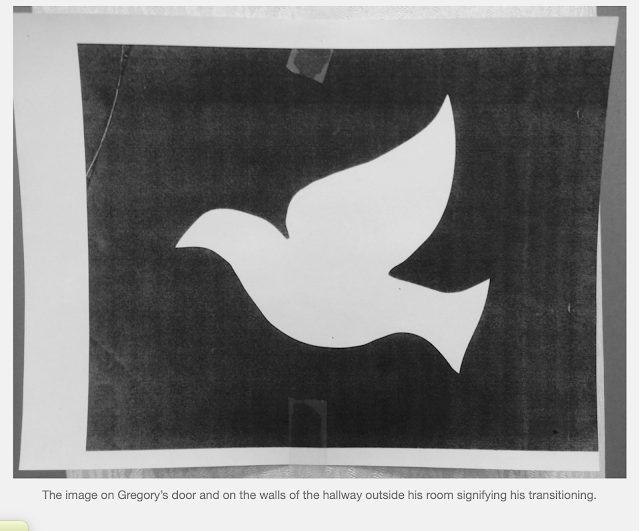 Gregory, a very dear old friend, died today (October 4, 2015) just a few minutes after noon. Diagnosed 12 years ago with early onset Alzheimers, this centered, gifted, and creative man has slowly lost the smooth and easy functioning of his graceful body, mind, and language, all the while sustaining his calm and gentle and awesome spirit.
I received a call Thursday from Michael, his partner of 40 years, that Gregory was ill and then on Friday learned that he was literally dying. Michael and Gregory decided years ago that if Gregory were to get seriously ill, there would be a DNR (Do not Resuscitate)—no IV, no antibiotics.
At school on Friday, just after I learned of Gregory’s status, I was obviously very distracted. I had one more class to go and I was impatient with the students. It seemed as if they were asking too many questions and needed a lot more coaxing and pushing than my reserves were able to sustain.
I rushed from school, picked up my husband, and went to see Gregory at the nursing facility he has been at for the last two years. He was quiet, some rasping, oxygen tube in his nose. Hospice had made him as comfortable as possible. He was sleeping. We all slowed down. Rubbing his arms, talking to him, feeling sad, we sat with him and said our tearful goodbyes.
Saturday he had a breathing cup over his nose and mouth to give some moisture to his throat, which was dry and causing him to cough. A little morphine under his tongue also relieved the coughing. After a half an hour it was taken off.
We had another opportunity to visit, another opportunity to say goodbye. It struck me that in contract to the model of living Gregory had been all his life, he was now demonstrating the same with his death— slowly deliberate, patiently intent, exquisitely graceful, and calm.
Today we arrived only moments after he had died. His body was still warm. Three days earlier, when the hospice nurse infomred Michael that Gregory was preparing himself to die, she didn't think he would last the night.
I realized that over these past few days, Gregory slowed his death and had made sacred space for us all to dip into. Gregory pulled us in, informed us, and held us close. His slow dying allowed many of us to find the time to come and say their goodbyes.
It allowed us to learn to not be afraid. It allowed us to open ourselves to the impermanence of the universe. To touch someone you love, as they are moving from one realm to the next, is excruciating yet beautiful, full of sorrow yet full of awe, nearly unbearable yet wholly bearable. A sacred space, indeed. Such a graceful and hallowed departing.
Over the years my friend Gregory has given me many gifts, but his death may be the most profound—patiently unwinding, organically reorganizing, slowly deliberate, he has transitioned to the next place/non-place. Gregory, I am forever grateful.
Jan

Posted by Michael Horvich at 12:00 PM