On this date, April 1, 2007, an article appeared in the Chicago Tribune "Q" Section written by Barbara Mahany about her visit to Michael's Museum which at the time lived in my guest bedroom.

The article was the beginning of a long journey which ended up in May of 2011 with "Michael's Museum: A Curious Collection of Tiny Treasures" becoming a permanent exhibit at Chicago Children's Museum.

The exhibit is now in its 9th year and continues to be one of the favorites at CCM. Over half a million people (650,000 to be exact) visit the museum each year which translates to close to 6 million people who have visited or at least passed by Michael's Museum. Thank you Chicago Children's Museum!!!

(Photos at top from the Children's Museum 2011. Other photos from when the museum was in my guest room as featured in the Chicago Tribune 2007.) 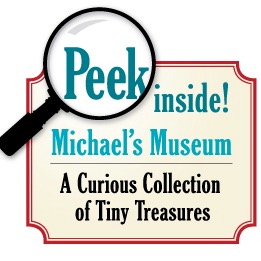 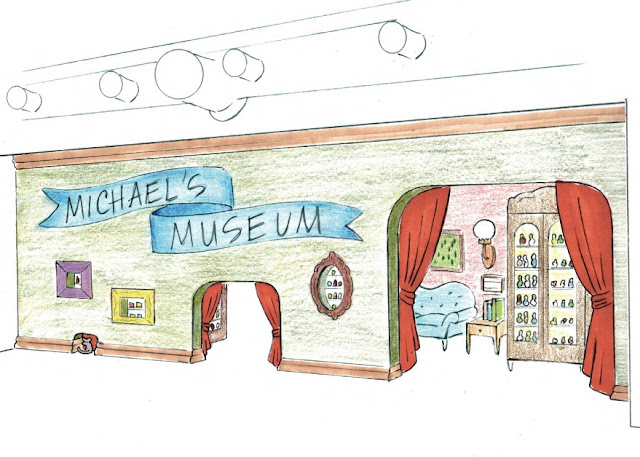 Original Design by Jenny Schrider: Inside of Exhibit 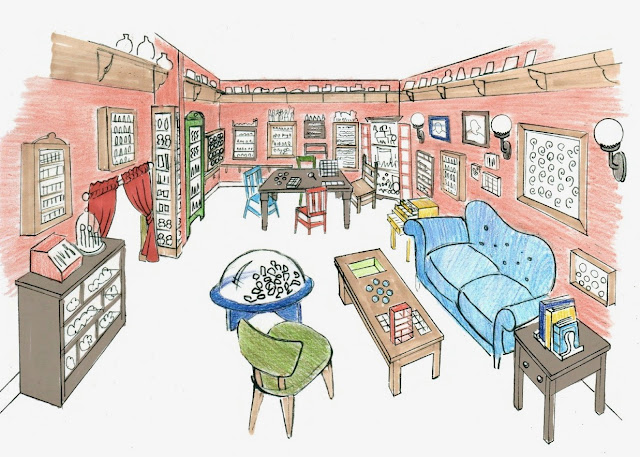 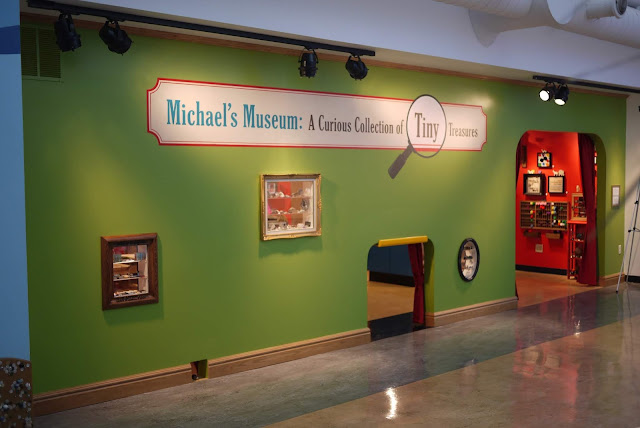 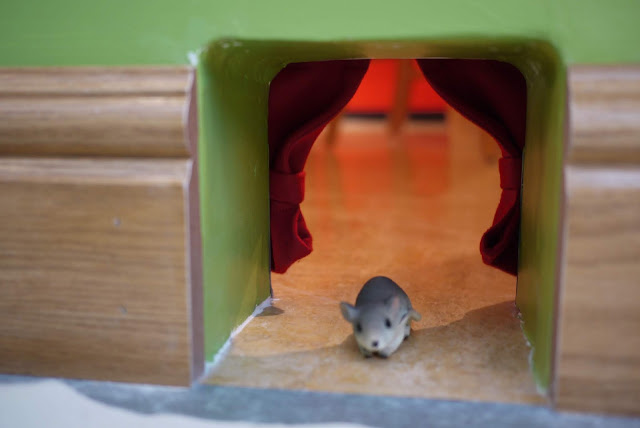 The Tribune article in which it all began! 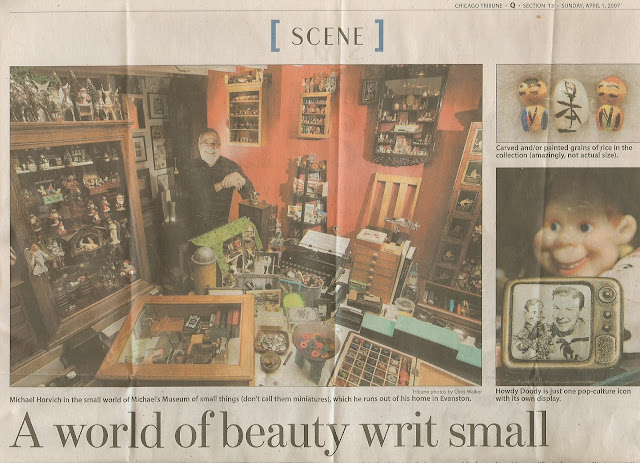 Chicago Tribune news: A world of beauty writ small
The wonder of childhood fits into one-room museum 04/01/2007 10:40 AM

http://www.chicagotribune.com/services/site/premium/access-
registered.intercept
QUALITIES OF LIFE: SCENE
A world of beauty writ small
The wonder of childhood fits into one-room museum

Here's the drill, should you decide some otherwise ordinary day that you need a little, little thrill: You'll need to cut down an alley in north Evanston, just across from where the Metra trains rumble day and night. There, at an old framing factory at the back of a leafy lot, ring the bell marked "residence." Start climbing stairs and don't stop till you get to a wee room, a room with ceiling hung so low that you may have to bend your neck.

Once in that 26-by-10 room, a room that's stuffed with 25 cabinets, eight separate shelves, four ledges, a curator's desk, five chairs and a double bed, do not, whatever you do, exclaim: Oh my, what a fine miniatures museum.

It is a museum, all right. And it is full of little things. But the chap in charge of it decidedly does not go for the word miniatures.
"I find the term pejorative," says the man, who finds the word too cutesy, too often pegged with little things -- owls and butterflies and beer cans, he says -- that go in, then out of style. His things, he says, will not go out of style.

The name of the man, by the way, is Michael Horvich, and this is his museum. Michael's Museum. Not Michael's Miniatures Museum, though you would be sorely tempted to say that.

"I would say it's my interpretation of all the beauty in life reduced to what you can hold in your hand," says Horvich, 61.

It is a collection of collections that can only be termed in superlatives. "Astounding" is one of those terms. And to stand in the room, to turn like the hands of a clock, is to take in a sweep of things in small scale, the likes of which you might never have seen.
Every inch, covered. Every inch covered in things measured in fractions of inches.

"It started out, I tried to leave blank space because empty space is important as well," says the one-man curatorial staff, Horvich, a retired teacher and a supernumerary (who acts but does not sing) at Lyric Opera of Chicago. "But it was hopeless."

Ready for a museum tour? Well, take a breath, a deep one.
In dozens and hundreds and dozens of hundreds, there are chess pawns in small, smaller, smallest. Monopoly markers, metal and not. Croquet sets, with mallets the size of match sticks, balls you might think to pierce with a fork, thinking they were peas. Bingo cards, bingo markers and marbles.

There are fetishes, milagros, billikens and kachinas, all little objects to bring you good luck. There are Nativity scenes, 40 -- one in an ostrich egg, one in a walnut shell and, in one, a Mary and a Jesus, each the size of a rice grain.

There are Coke bottles as thin as two toothpicks and Coke cans the size of the nail of your pinkie. There is a Statue of Liberty half the size of a raisin. There are things in a bottle, four-leaf clovers, jumping beans, penny whistles, Oscar Mayer wiener whistles, a plastic Heinz pickle smaller than one elbow of macaroni.

Oh, and that's only the half of it. Or, more likely, the tenth of it. (Horvich hasn't a certifiable census of all his little things; must be somewhere in the millions, although he has never counted. "It would be too claustrophobic to know," he sighs.)

"It's a way of preserving my youth," he says, opening the glass case that holds the teeny blue flasks that hold leftover droplets of Evening in Paris. That was the perfume his mother wore all through his boyhood, growing up on Chicago's North Side.

"I guess I've been collecting all of my life. If I had, say, a favorite car, I'd stuff it in my pocket and carry it around all day." His front right pocket, he says, was always filled with things that caught his eye. Not typical boy things, like a frog or a pocketknife. Usually, a sparkly thing. A beautiful thing.

"I remember sitting on the stairs in the hallway outside of a school friend's second-floor apartment. We were maybe 6 or 7 years old. He had a cigar box of sparkly things that his mother had given him. There were bits of broken jewelry -- loose sequins, rhinestones, pearls and silver and gold chain. I remember thinking this was the most beautiful thing I had ever seen."

He started collecting his own bits of beauty. It wasn't long before he set up his first museum installation, as he calls it, on an upturned orange crate on Broadway at Ainslie Street. He'd bought some "first place award" pins at a dime store, pinned the pins to a tablecloth, sat on a stool and "presided as people walked by," he recalls.

Through the years, Horvich says, he couldn't help but collect in collections. "If I've got two of something, it's a collection."
Until five years ago, his collections were a bit, um, unruly. Stashed in a drawer here, on a tabletop there. But then, he and his partner, architect Gregory Maire, moved into a rehabbed industrial space, and Maire pointed up the stairs to the room at the top.

"'Oh, boy,' I said, 'it's Michael's room,'" recalled Maire, who rejoiced that all the scattered stuff could be harnessed in one place, "much like the inside of a sugar Easter egg."

The museum, by appointment only, has no entrance fee (though donations are not turned down). And it does have a gift shop: a wooden box, disguised as the book "Treasure Island." Inside, deaccessions of collections that have lost their pizzazz. Or, simply, duplicates. You come to the museum, you get to choose one thing, gratis.

Horvich wants you to leave with a little delight in your heart. He wants you to have reclaimed a bit of your childhood.
And most of all, he would like a real live museum to make a home for his not-miniatures museum.

"Just to share with everyone," he says. "Imagine the joy. Instead of 50 [people] a year getting to see it, maybe thousands. Can you imagine bringing your children to see all this stuff?

"And then the plaque might say, 'Imagine the magic. Experience the joy.'" A man who loves littles, dreaming quite largely in scale.
----------
bmahany@tribune.com
Should you find yourself hankering for a tour, check out www.michaelsmuseum.org.
Copyright © 2007, Chicago Tribune


A year-end follow-up in the Tribune

Michael's Museum in the guest room of Gegory and my home.
Photographs taken by Tribune Staff Photographer Chris Walker 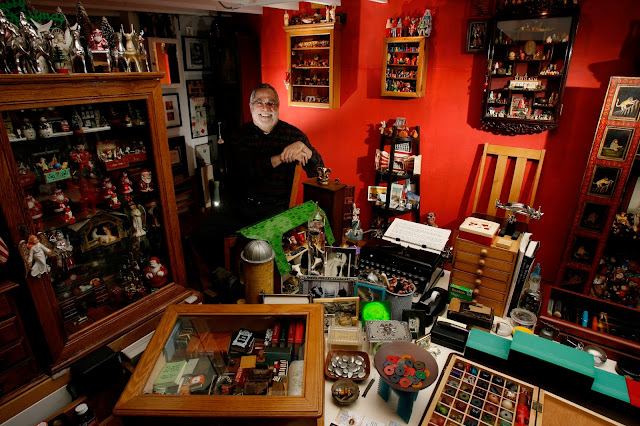 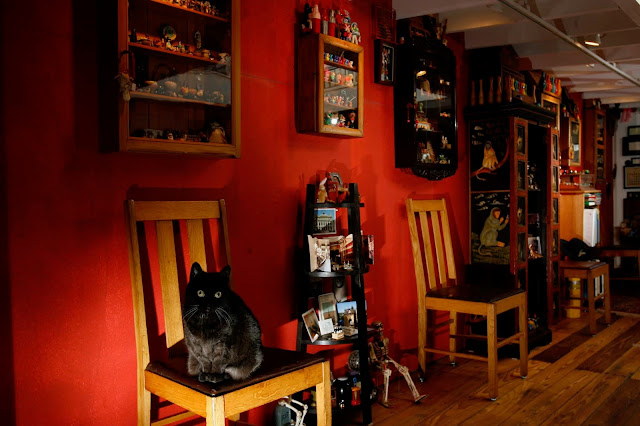 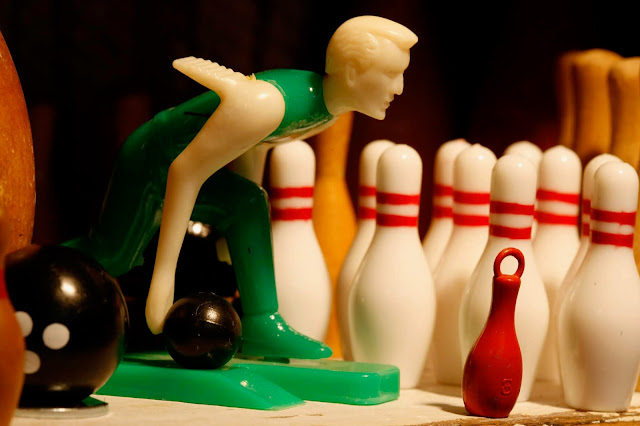 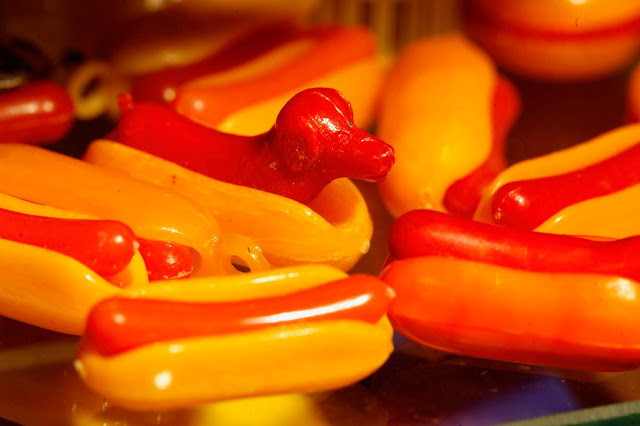 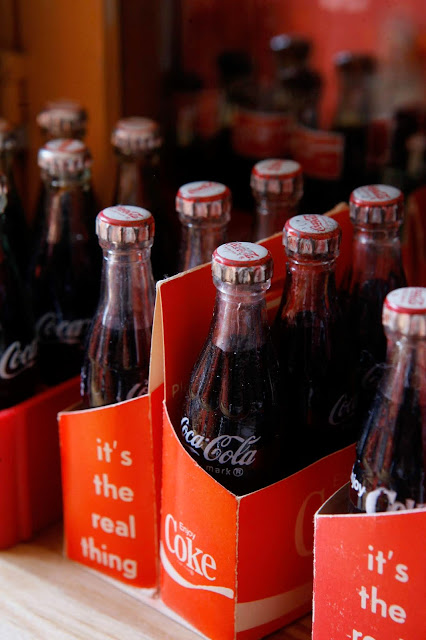 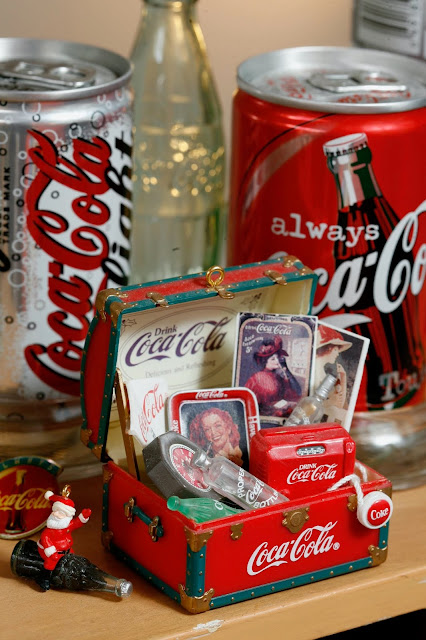 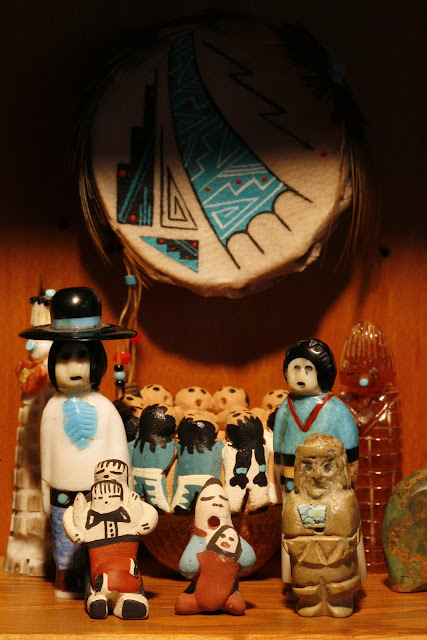 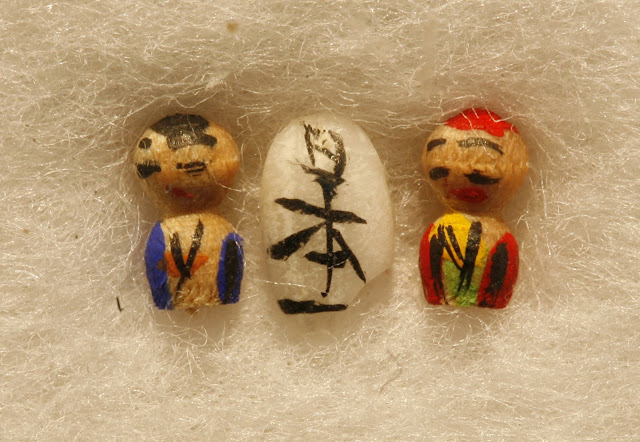 Posted by Michael Horvich at 2:26 PM