A Reply to Kate 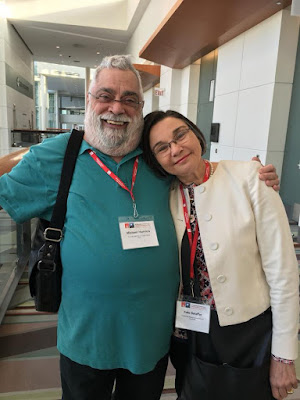 My friend Kate Swaffer, living "as well as she can with Dementia" in Adelaide, Australia, and being one of the fiercest advocates for Dementia/ Alzheimer's Disease whom I know, in a recent post in her blog, talked about her feelings of having failed to make a difference in her advocacy endeavors.

I shared the following with her about some of the thinking her post caused in me last night as I tried drifting off (without ease) to sleep.

Dearest Kate, responding to: "As I think and write about the value of advocacy, I have come to believe that there are very few people who really benefit from it."

Let me share what I will call HALF A DOZEN OF MY (boldfaced and underlined "MY" truths" (as I see them).

PS After reading your post at bedtime, I spent several hours thinking about what you said, going over this in my mind, and coming up with these 1/2 Dozen Truths.

TRUTH ONE: Most people do not think or care about anything unless it directly affects their life or the life of their loved ones (and often the latter is less true!)

TRUTH TWO: Most people have a difficult if not impossible time dealing with a terminal illness, their own or their loved one. Cancer has a chance of "being beat," Dementia/ Alzheimer's DOES NOT. That makes it even more difficult to face.

TRUTH FOUR: Societal change moves at such a snail's pace that it is mostly unnoticeable to anyone who cares to watch. It can go on for generations and even then make little progress even though it is smoldering there in the dark.

TRUTH FIVE: Sometimes an "explosion" of change occurs and suddenly the change we have been seeking seems to occur overnight (but really it has been fulminating over a long period of time.) Sometimes it seems like that change will never happen because there are so many other important changes that need attention and there seems only to be a finite amount of attention available!

Truth Number Six is the BIG one I took away from this post of your "Ineffective Dementia/ Alzheimer's Advocacy".

Whether you are the "advocator" or the "advocatee" the knowledge, understanding, techniques for dealing with, support in making changes as necessary, and unqualified love one person can have for another perhaps that is the best one can do and the best one can expect to do based on my first five truths!

As Teepa Snow says, "Until there is a cure, there is care!"

CAVEAT to MY TRUTHS: There are so many people living with Dementia/ Alzheimer's Disease who do not have close family, a partner, or friends and they are on their own at home, on the streets, or in a care facility.

The same is true for the elderly and infirm. This part breaks my heart and needs attention.

This brings the issue to a much higher, societal, global level in which we all need to take care of each other as fellow human beings and this is such a large issue that for sure the only hope is that each one of us does what we can for each other on a one to one to one basis.

The stranger you help might be you one day!

Posted by Michael Horvich at 1:21 PM