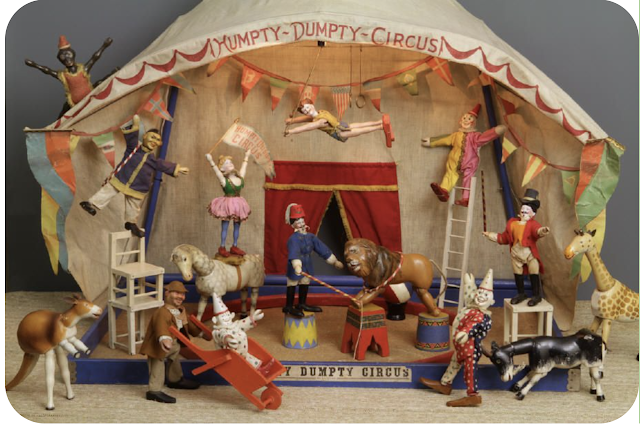 The train arrived in town approximately the same time every year. Everyone in town knew that it would be there soon and day by day, one could feel the excitement building. When the circus was about a week away, posters with pictures of the train, the circus tent, and the entertainment midway began showing up on electric poles all around town. The circus was coming to town and being a small town, there usually was not much happening to excite its residents.

Around the base of the train flatbed car, a small version of the circus train itself rode around and around on its miniature set of tracks. The engine was steam-powered so it huffed and puffed as it carried its passengers around the perimeter of the flatbed train car and periodically announced itself with a loud steam generated whistle. The five passenger cars housed two riders in each brightly colored; all be them dinged, smudged, and slightly faded; box-shaped train-type cars.

Built over the miniature train ride, a roller coaster ride took its riders; as well in brightly colored all be them dinged, smudged, and slightly faded box-shaped train-type cars; up and over and around! While not all that high the ride took its passengers on a rickety, rackety, rockety, more dangerous feeling adventure.

The tracks were suspended up in the air on girders which were brightly painted, each supporting a waving colorful flag and wrapped in twinkling lights, which made the ride quite attractive as the centerpiece of the circus midway.

The coaster's loading platform was at the level of the steam engine miniature train but then carried its passengers up to the highest point on the ride in a ratchet, ratchet, ratchet way as the cars were pulled to the top by a noisy gas-driven motor. Once at the highest point of the coaster, the steep decline which came next and, gravity carried the cars through to the end of the thrilling adventure.

The flatbed had a colorful banner announcing "Michael's Circus", flying even higher over the roller coaster and loudspeakers mounted on each corner of the base of the car. While on the midway, in between circus performances, calliope music was played loudly to add to the joy of the visitors.

An added feature of the last car on the train, and an added benefit, is that it did not need to be assembled when the train arrived in town or be taken down at the end of a run. So as the train pulled out of town and moved on, arriving at the next town, it served as an eye-catcher; and traveling signpost to say goodbye to one town and to announce that the circus was coming their way at the next.

Now that you have this image of the circus train and its last car in your mind, watch for it in a dream coming your way soon. That is how it arrived for me at my destination!

PS: The photo above is of a wooden circus made in Germany. Gregory had this same circus given to him when he was nine years old (1957) by his parents on their return from a trip to Europe. The circus is now on display at Michael's Museum: A Curious Collection of Tiny Treasures, a permanent exhibit since 2011 at Chicago Children's Museum on Navy Pier.

Posted by Michael Horvich at 12:14 PM