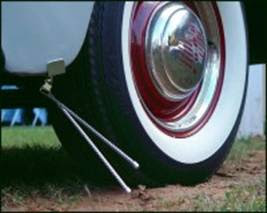 When I turned 16, my father gave me driving lessons. The year was 1961. We were driving down McCormick Blvd in Chicago. I was behind the wheel, my dad was in the front with me, and my mom was in the back.

We were going around the curved run on McCormick, near Oakton. Apparently I had not “curved” enough, so I got too close to the curb and the feelers sounded.

My father threw a “hissy fit” or whatever the masculine version is.  I didn’t hit the curb and quickly corrected the car but my father still was exploding.

Shortly after, my mom decided that my father was not the best candidate to teach me how to drive so she signed me up for private lessons. Lessons in one of those cars that had two steering wheels, one for me and one for the teacher!

Posted by Michael Horvich at 4:36 PM