At various times through the years of my adult life it has been easy or difficult, fashionable or unfashionable, political or non-political to fly the American Flag. Sometimes we are proud of our country and what it stands for. Other times we are not so proud or closer to ashamed of what our country's leaders and/or citizens do or say.

Maybe this waxing and waning of pride of country is OK. Throughout history nationalism in its extreme has lead to trouble. Maybe a healthy outlook and the ability to say what one thinks about one's country is where the balance should be and what makes the U.S.A. a great nation. We know that in many parts of the world the "citizens" do not have that right, freedom, ability … call it what you will … to do so.
"The negative results of nationalism cannot be denied. It can cause division in societies when one nationality classes itself as superior to another. This also generates racism, and can often lead to violent and bloody conflicts. On the personal level, individuals may be persecuted because other individuals or groups believe their nationality to be inferior, or that it poses a threat."
"Nationalism is a powerful tool, as it takes its strength from the sentiments of belonging that most individuals possess. This has led to its use by politicians as a way of gaining popular support through uniting a people under a common cause. It is a vague concept, and can be shaped by the bearer to mean almost anything, and most people are vulnerable to it in some form or other. Because of this, it can be a very dangerous weapon in certain hands." (What is Nationalism? Katy Hughes. 2008.)
Popular or unpopular, today is a day to fly our flag in memory of those who died unnecessarily and those who gave their lives to help others. We need to think of those people still living who were affected by the deaths. The need here is to focus on the lives and love of these people, not the hate of their perpetrators. We need to revisit 9/11 and the World Trade Towers  by celebrating the lives of those who died, not by stoking the fires of hatred against others.
We need to give a lot of thought to the differences among the peoples of the world and weight carefully the influences of the Freedom of Speech and the Freedom of Religion. We need to work to make sure that the two can coexist. With the September 2010 threats of burning the Koran, the continuing fear of and threats against those who practice the Muslim faith, the Ground Zero and Muslim Mosque controversy, with some of our fellow countrymen and politicians using these differences to sow hatred and gain power, we cannot let one freedom be used to put down the other freedom, both must coexist. That must be our goal.
We need to find a balance between freedom of speech and freedom of religion and the promise of the biblical Noah, "Never again!" Either way, today is a day to fly our flag. 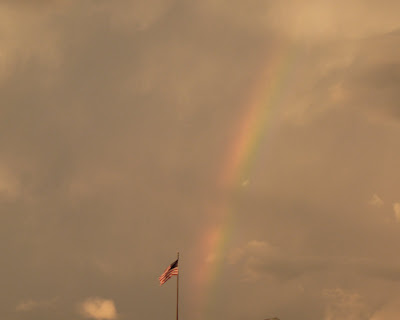 Posted by Michael Horvich at 3:01 PM