I may have written about this previously but have been thinking about it again.

The problem is that they continue to get into trouble. When I think I have battened down all the hatches, they discover one more with which to get in trouble. 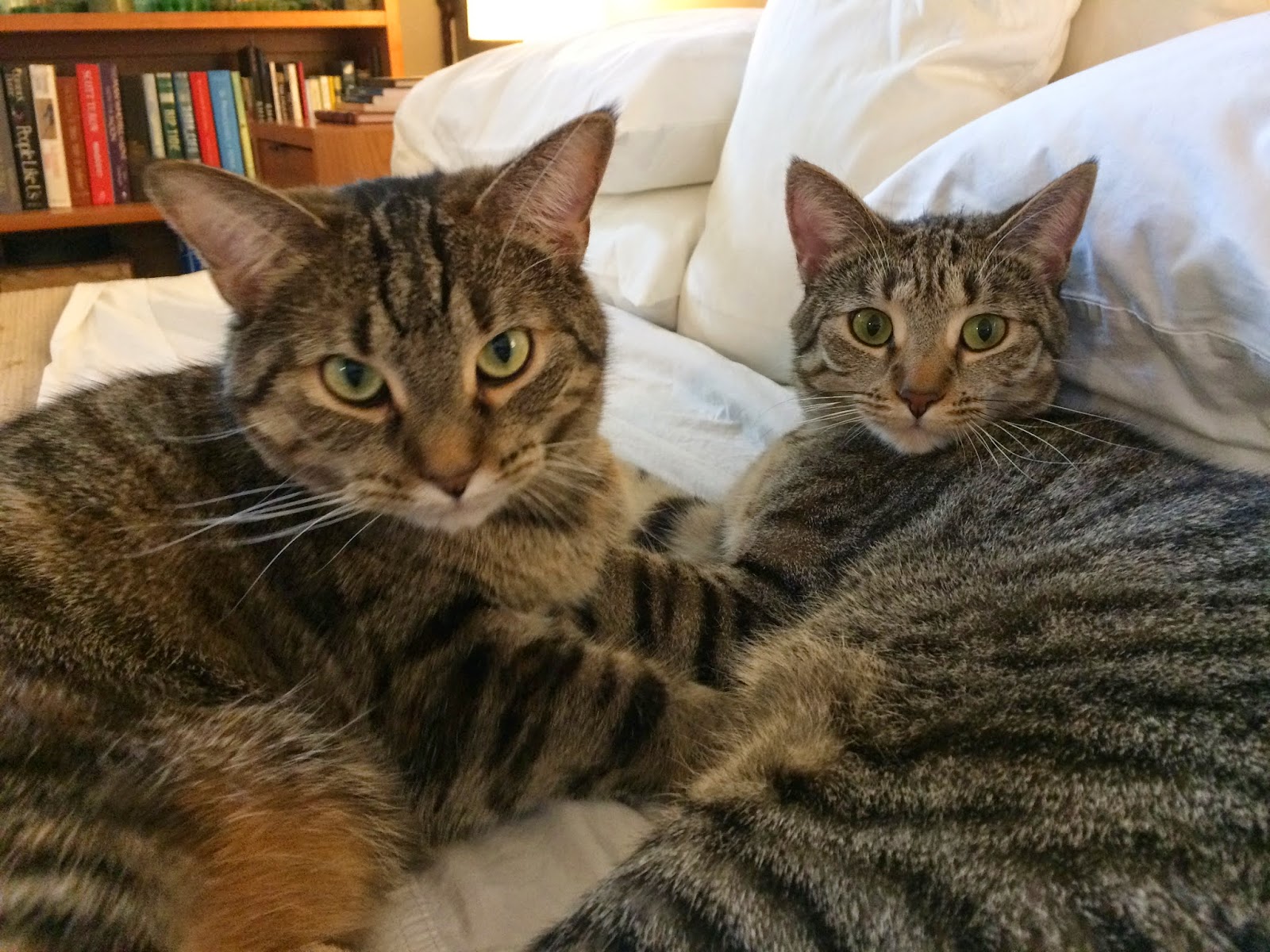 This is quite different from Gregory and my previous cat Mariah. When she was told no, she would never do what was associated the the "NO" again. For example, the first Christmas we had her, she attacked our three foot, artificial tree with the antique German glass ornaments. She didn't do too much damage but enough that I was concerned about her continued attacks. 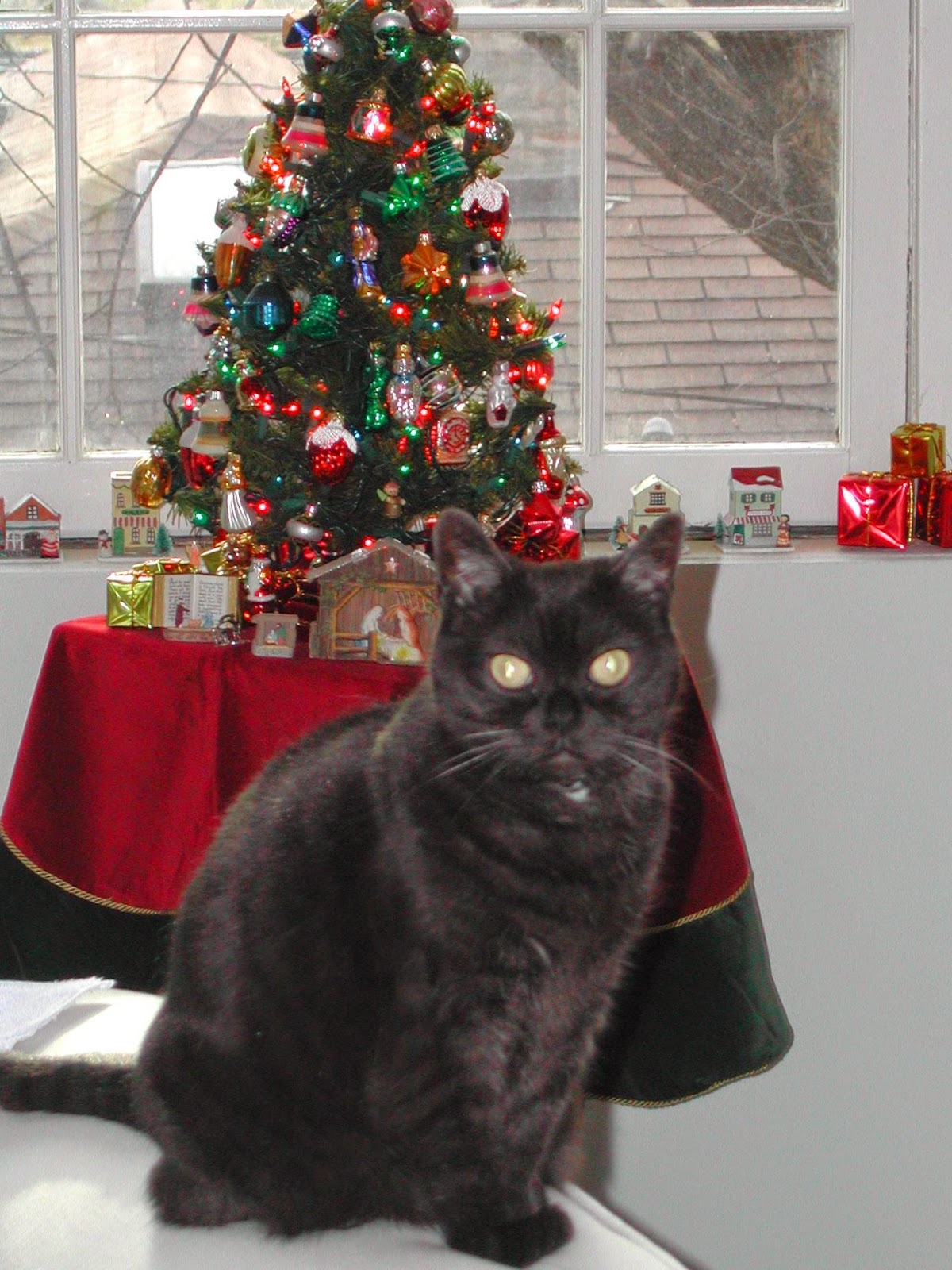 Mariah (AKA Little Bit) and The Christmas Tree

I picked her up as close to the tree event as possible, held her in what I call "The Teaching Position" which was sitting on my hand, facing out, supporting her with my other hand. I explained to her, "This is a Christmas Tree. It is for people to enjoy and to look at. It is not a toy and you should not play with it!" Then I would take her paw, touch the tree, and say, "NOOOOO" in a firm voice.

She knew the word NOOOOO and when doing something BAD would stop when I said it. When it was used in "The Teaching Position" she would understand that it was really BAD and never do it again. Really! Hard to believe but Mariah was a very intelligent cat and somehow the communication worked. She NEVER touched the tree again.

She NEVER got up on the kitchen counters, never settled in on the dining room table, she never chewed shoe laces, she never took things from the night stand that did not belong to her. She was really a prize when it came to behavior.

Depart Mariah, enter Gigi and Emma. The new girls presented problems and dilemmas from the beginning for which I was not ready.

They occupied every surface including kitchen counters and table, they played with the shades, they ate shoe laces, they screamed when locked up in the bathroom, they chased each other around the bedroom and bed at 3:00 AM, they stole some items never to be seen again, they attempted to pull up the bedroom and den carpeting strand by strand, they scratched doors if they wanted in or out, they shoveled out from the liter box half of the liter.

Part of the problem, I believe, is that they supported and learned from each other's bad behaviors. In fairness to them, this is the first time I have ever adopted two kittens at the same time. Usually, Gregory and I had an older kitten and a younger one. When the older one died we would get a new younger one by which time the then younger one was now the older one.

Most of the problems have settled down (although not completely eradicated) through the use of conscientiously keeping the closet doors closed, not leaving little things lying around, and the use of PSSSST cat devices. The devices consist of a can of compressed air attached to a battery powered motion detector. When the cat approaches the area protected by the PSSSST a powerful spray of cold air accompanied by the loud hiss of the air frightens the cats away.

After a month or so of using the PSSSST, I put them away thinking I had settled the problems. Well guess who noticed that the PSSSSTs were missing and began, slowly, to reincorporate the bad behaviors into their day to day play time.

So out came the devices and once again problem solved. This has happened for several intervals and I believe that the duration of abstinence by the cats has lasted a little longer between PSSSST sightings. Time will tell.

Using the word NOOOOO also helps but in a way 360 degrees from the way it worked for Mariah. With Mariah, NOOOOO meant "Do not do this and never do it again." She understood and never did it again.

To Gigi and Emma, NOOOOO means one or more of the following: 1) Don't do it now, try again later, 2) Don't do it today, try again tomorrow, 3) Try it when Michael isn't looking, 4) Distract Michael, then do it, 5) Wait until Michael isn't home and then do it, 6) Don't do it now but feel free to do it sometimes, 7) Do it quietly and no one will notice, 8) Do it anyway and risk the repercussions, 9) Do it together and Michael will not know which one of us did it, 10) Stop it, but not forever, just for now, 11) Stop it until next time, 12) Think about it but make no decisions yet.

All that being said, I love my girls and the unqualified love they always offer. I have also come to enjoy the "cat and mouse" game of trying to best Gigi and Emma, but sometimes I believe I end up being the "mouse."
Posted by Michael Horvich at 11:33 AM