When I was teaching 5th grade I helped my students through creative visualizations. I created for myself at that time a “forest near the ocean” where I could go when I needed to be peaceful.

When I studied Yoga Nidra maybe five years ago, part of the practice is to create a safe place where you can retreat if you get uncomfortable or fearful of what you are working on in the intention of your practice. After I “recreated” a forest to which to retreat and find peace, I realized that it was the same one I had used many years before. A private, safe haven in my mind.

When America Martinez gave me her first reading, the Angels and Spirit Guides and Ancestors wanted her to describe for me where they were gathering on my behalf and invited me to sit with them. It was a beautiful forest with dappled shade, flowers growing, and a clearing where we could sit. I felt that it was the same forest that has continued in my life.

“Your guides were in a forest. The scene that I got was that we were walking down a trail with them. High trees, tall trees. They came to an area of forest where there was a garden that had been created. There were some flowers and through the spaces between the trees there was some sun coming in. The garden was in full bloom.

“It was a sacred space within the forest with its tall trees which of course hold a higher wisdom. The trees accumulate this wisdom through time by watching all the things that take place around them. A forest is a sacred place not only because it is a place of nature but also a place of wisdom. Your guides asked me to detail this for you so that through the power of your imagination you could take yourself there and find yourself walking with them on the trail, and finding the garden.

“In the center of the garden was a space that was clear, earth and some grass, and in that space they sat in circle and they welcomed you to step into the circle too, invited you to sit with them, to breath with them, and to join them in this sacred place in your heart. To think of it as a sacred place in your heart, a temple to visit by way of your breath and to settle there into your heart. And to feel the healing, the nurturance, the breath, and the inspiration that nature brings to you.

America added that I could manipulate the forest in whatever way I might want to, like planting more flowers. So I brought back the ocean from my previously created visualization and put it a little distance away so I could hear the waves and walk over to the beach when I wanted. I also added a bench to sit on near the circle and a cabin across the way in which to get out of the rain or take a nap.

On one of my Yoga Nidra sessions, while in a deep meditation, I went into the cabin to look around and a shadow ran by my legs. I looked around and realized that the shadow was of Mariah, a dear cat who had died a while back. I was so happy to see her and I realized that  I could invite any departed soul back to visit with me including pets, relatives, friends, etc.

The more I thought about it, the more I realized that my current imagined forest retreat’s cabin, closely resembles the one that Alice used at Ragdale. Some twenty years before I won my two week residency in Creative Non-Fiction Writing by competitive application, I had visited Ragdale when Gregory was doing some pro-bono consulting on how to create a disability friendly space for them in order to be able to accommodate an artist who needed accessibility. While he was working with them, the then director suggested I walk around the grounds and that I could feel free to go into the cabin because Alice was not currently in residence.

It was a magical experience to be in her cabin, to explore respectfully, to sit quietly and think.

I would love to have a photograph as a visual memory of that experience so I reached out to my now dear friend Susan Tillett who was Director of Ragdale (now retired) when I did my residency to see if she had any that I might have. She was not able to come up with one but I do have these of the exterior: One on a post card from a post card showing the1820s log cabin which at the 1933-34 Chicago Century of Progress was billed as “Abe Lincoln’s Indiana Home.” I will dig through my photo archives for a few other photos of the outside. In a future post I will try to "visually" paint a picture of what it looked and felt like. 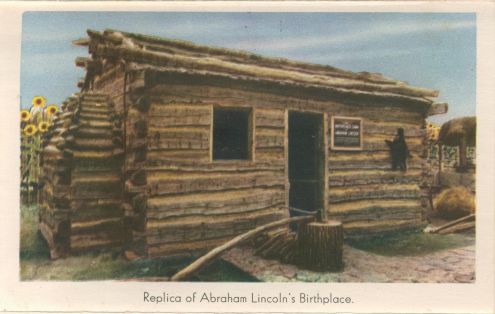 Posted by Michael Horvich at 2:08 PM