What Is She Thinking?

She did it again this morning. We have the propensity to personify our pets. We like to give human attributes to their behaviors and actions. In reality, if we study our pets carefully we might actually be able to figure out what they are thinking and why they are doing what they are doing.

I will be detailed here but not graphic. Every morning, while I am sitting on the toilet, Emma comes to get her morning pet. I guess she has missed me throughout the night and needs to be reassured of my love by my giving her petting attention.

Sometimes this can be distracting but I recognize the importance so will pet her for a while no matter what. She jumps up on the stool next to the stool (:-), puts her front paws on my leg, leaving her back paws on the stool, and I pet her.

She actively involves herself in this petting by pushing back, by rocking, by lowering her head and rubbing my leg. When I have had enough, she never can get enough, I push her back onto the stool saying, "OK." Sometimes I have to do this three times before she gets the idea and when she finally does, she hops up onto the sink where live her food and water.

This is not the phenomenon that I want to tell you about today. It is a pre-curser to the real purpose.

While I am sitting there (remember I said details but not graphic) Gigi arrives some minutes later. She walks into the bathroom with a determined, studied pace with the "puff ball" in her mouth. She stops, places the "puff ball" in the middle of the floor, and then proceeds to her food which is located on the floor by the bath tub.

The "puff ball" is Emma's toy. It is soft, red, blue, and white, with a vein of silver colored plastic running through it for added enticement and noise while with being played. She carries it around in her mouth and howls, announcing "I have caught my prey!"

She will also play "fetch" with the "puff ball" bringing it to me, dropping it at my feet, running after it when I toss it, and bringing it back, for what seems like hours at a time.

Gigi herself prefers a crumpled up piece of paper for her chasing and mouse catching practice. Often she just likes to muffin up on the sofa and watch Emma play.

Emma actually has a number of the same type of "puff balls" and they are all kept in a basket in the front hall with other toys: mice, balls, bears, feather toys, fish shaped things, pillows, you name it.

There must be between twenty five and fifty toys in the basket, I have never taken the time to count them. For Christmas this year, they received three Rats, approximately six inches long, furry, and with felt tails; one brown, one white, one black. Last year they got the "Three Blind Mice," each with eye patch and white canes.

So almost every morning Gigi goes to the basket (where all the toys are returned every night) and selects one of Emma's "puff balls" and brings it into the bathroom for her.

Gigi is the smart one and Emma is a little dumb (pardon me, don't say this to her face) and maybe Gigi figures that Emma will never find the puff ball on her own in the basket of many toys. So Gigi, being the good (smarter) sister is willing to help and to make sure Emma gets her puff ball. 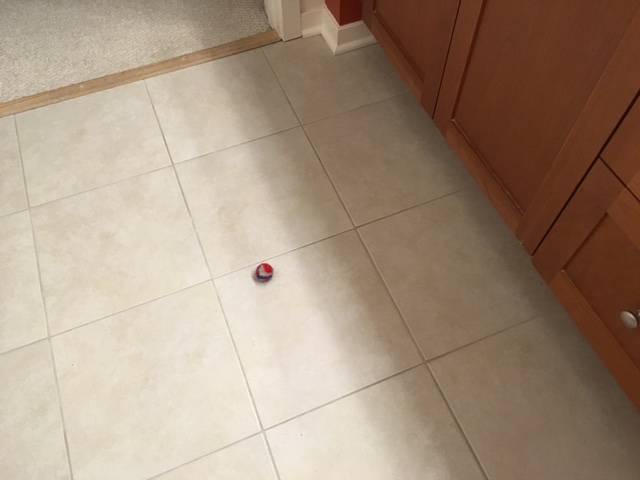 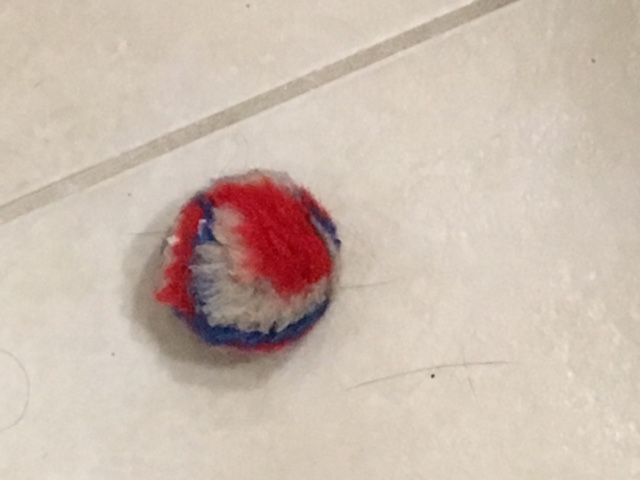 Posted by Michael Horvich at 10:35 AM