My first job ever was at the High Low Foods on Devon Avneue in Chicago. It no longer exists. I was still in high school and this was a summer full time and school year part time job. I was fifteen or sixteen years old.

The work was not easy. Stocking cans is heavy work. My station was in the 10¢ can area. Across the front of the entire store was a row of racks on wheels, each rack three bins high. The store was known for this area of 10¢ cans of food. Even fifty five years ago, that was a cheap price for a can of food.

I would take inventory of the bins, fill a pallet on wheels with boxes of cans need to fill the empty areas, and roll it to the front of the store. I had a special razor blade tool to open the boxes.

The cans were laid end to end on their side beginning at the bottom of the wire bin and stocking one row on top of the other until you got to the top of the bin. The bins were approximately 24 inches wide by 18 inches deep by 18" high.

When there was a need I also bagged groceries. To this day I am pretty fussy about how my groceries are bagged if only because of my excellent training when I was a youth.

At the end of the evening, we had to mop the floors. The way this worked was that a bucket of soapy water was dumped at the head of an aisle and two or three of us, in a line, would mop left to right, left to right, until we got to the bottom of the aisle.

We would begin at the head of the aisle again this time ringing out the soapy water until the floors were only wet. A final pass would include rolling new buckets along with us which contained clean water, ringing and mopping. making sure the floors were no longer soapy.

Over and over again we did this down the ten or twelve aisles! Tedious work and hard. Each night I worked I would arrive at home with an aching back, fingers rough and nicked from the cans, and starving from having worked with so much food around but not being able to eat any!

Found this old photo of a High-Low on the South Side of Chicago. They all looked the same so I can imagine arriving here to work at the one on Devon Avenue which was five or six blocks from my house. 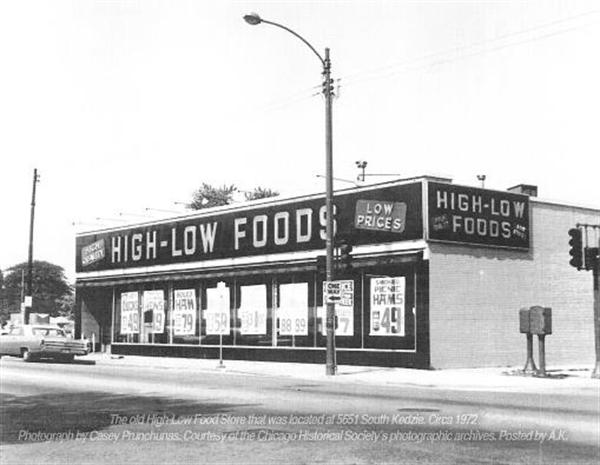 Posted by Michael Horvich at 5:24 PM