How I Spent The Anniversary of Gregory's Passing: October 4, 2016. By: Michael Horvich

I wanted to title this post "How I Spent My Summer Vacation." Being fall and back to school settled in, it almost feels to me like the kind of composition you were asked to write as a youngster on the first day or two of being back in school.

Gregory took three days to prepare for his next journey on the other side of life. In previous posts, I addressed each day and on the day he died, posted a kind of obit announcement. Many followers on Facebook and this BLOG, as well as via texts and phone calls, sent well wishes and love. Much appreciated.

Today I would like to write about how I spent the first anniversary of Gregory's death, October 4. In the Jewish faith, the year point is a turning point when one should be done with grief, done with going to temple and saying the mourner's prayer every day, and finally erecting a tombstone to honor the loved one.

First, I will grieve Gregory's death for the rest of my life, although I know it will be easier. So don't tell me when to stop grieving!

Second, I did not go to temple every day to pray for Gregory's soul as I know his kind soul is very much at peace, the temple is in my body and mind, and rather than praying every day, I choose to carry Gregory in my mind and in my heart, 24/7 in everything I am and in everything I do.

Third, being cremated, there is no grave to mark his remains so no need for a tombstone but rather, and perhaps more beautifully, the legacy of his love to so many people who knew him lives on.

Also the More Than Ever Education Fund, established in his memory, in perpetuity, will help youth confronting homelessness to receive a college education, helping them break the chain of poverty, abuse, and unfortunate events and allow for a full, successful life.

Finally, the documentary Alzheimer's: A Love Story has been, as of this date, accepted to fifty-two film festivals locally, around the US, and around the world, and had won 26 awards! Gregory and my love story has been shared with thousands and tens of thousands of people.

The story keeps our "same sex love" story alive and spreads an understanding of the possibility of great love helping to live with and coping with Alzheimer's.

In the morning I did my usual absolutions, washing up, cup of coffee, cat petting, and then sitting down at my computer to check e-mail, Facebook, and to spend the rest of my morning writing.

If you want to consider yourself a writer, you must "Write every day!" That is what I used to tell my students and that is what other writers have told me (or what I have read in their books on writing including Mave Binchy, John Berger, James Lipton, Michael Sims, Ray Bradbury, Steven King, Ted Kooser, Strunk & White, Rilke, and John Schimmel.)

At 11:50, ten minutes before Gregory passed, I played Chopin's Ballad 23 (a piece with lasts 9+ minutes.) It is his favorite piece and one that he mastered over a period of five years finally playing it for the Gay Family at the "Musicale" which was held many years ago at Chuck and John's home in Racine, Wisconsin.

I sat down on the bed facing Gregory's shrine (I have written about the shrine previously) and cried and cried and cried for the full ten minutes leading up to the end of the music and to the striking of noon (the time when Gregory took his last breath.)

Both cats joined me in grieving Gregory and both head butted me by way of petting me with love. I was aware that my crying was different but stayed in the "here and now." I sobbed, howled, keened, was short of breath ... but still ... it felt different.

When I analyzed my crying later;  I realized that I did not feel lost, or hopeless, or out of control, or overwhelmed. I just missed Gregory and cried for that.

I cried for his difficult times but thought of them as a collective experience, not any one single event to peek memories or regrets.

I cried for the times I was not as good to him as I could have been, when I struck out or was mean, but thought of them as a collective experience, not any single event to peek individual memories or regrets.

It was a good cry. As I settled down, I noticed that the roses I had put by Gregory's box needed to be freshened, stems cut and water added. I got up, picked up the vase, turned around, and headed to leave the bedroom towards the kitchen.

When I was half way across the bedroom, I heard a noise, something fell to the floor. Ah, I thought, the cats. I turned to check, expecting the cats to have pushed something off the shelf, but instead there were two greetings cards on the floor which Gregory had given me long ago and which I had saved. They had been slid in (not in photo) next to Carrie's Sewing Box (which contains G's Cremains) and they had fallen to the floor.

The cats were nowhere to be seen. I had not created any major draft in picking up the vase or in walking away. So why did those cards fall to the floor? Magic? Miracle? Visit from Gregory? I believe! Do you?

This is one of the cards which fell to the floor. Gregory gave it to me, after the Dementia/Alzheiemr's diagnosis but while he still had language at his command. Inside the card is written in Gregory's hand, "I have all I need in you!" 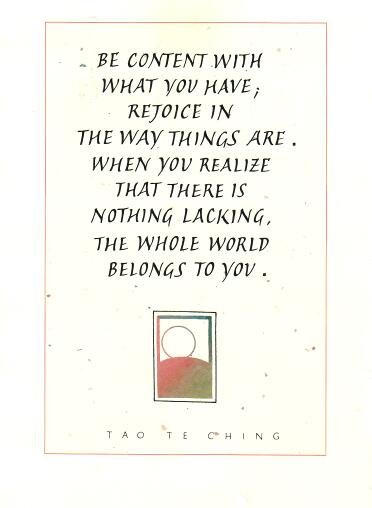 This is the other card which fell to the floor. I do not remember the occasion for which I had given it to Gregory but for some reason had saved it. Inside: "Life is Wonderful ... Because of You." 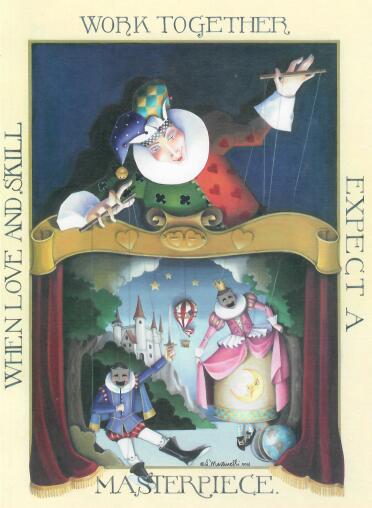 By now it was afternoon, I finished up a few things around the condo, got dressed and headed out on my day's celebratory adventure.

I had told several friends what I would be doing to celebrate the day of Gregory's death and each one thought I was a little crazy! I decided that I wanted to visit the Holocaust Museum in Skokie.

Up until now I have never been brave enough to face that extreme experience, but I wanted to be strong and to face it. Also, I figured that experiencing the museum on the day Gregory died would give me some perspective on life, on death, on loss, on love. And it did!

On entering the museum, after paying my admission, emptying my pockets and taking off my jacket and sending them through the conveyer, and going through a metal dectector; I was greeted by Ida Paluch Kersz.

She introduced herself to me as a "Holocaust Survivor." It was all I could do to hold back instant tears. She briefly told me about her story, and gave a brief overview of the map showing how the exhibit was laid out. Her story can be read at: http://articles.latimes.com/1995-08-27/news/mn-39311_1_holocaust-survivor

As I walked through the museum's exhibits, watched the video presentations, read the placards, and looked at the artifacts beautifully displayed throughout, I felt a sense of heaviness. Several times I found myself choked up and a tear or two rolled down my cheek. But for the most part, I was good. I was OK.

At the end of the exhibit, they have a well placed "Hall of Reflection." A nicely sun lit, tall open space with marble cubes in a circle for benches, with a candle burning in each of the many outlooking windows which also circle the hall.

Circle of life maybe? Felt comforting and peaceful after the dark, winding exhibit with difficult to watch videos and difficult to look at photographs, and artifacts which still seemed to carry the painful aura of holocaust temples or victims they used to belong to.

In some ways, the hundreds of thousands of people killed (not only Jewish but also Gays, intelligents, rebels and scapegoats etc) were like Gregory ... not victims but rather HEROS!

This is what greets you on exiting the exhibit: 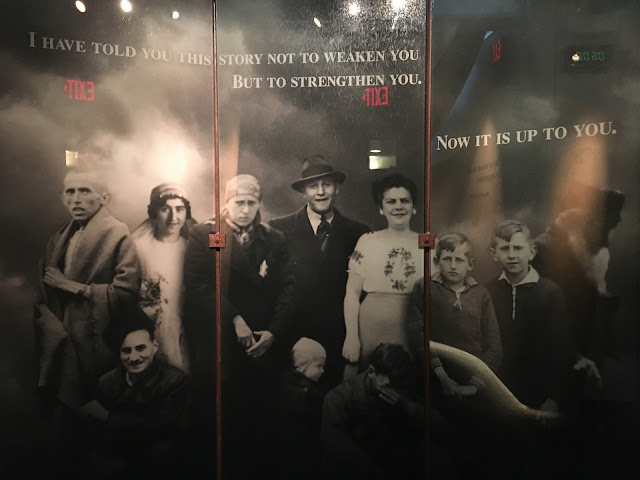 And the following quote was there also ... which is so poignant a message for today. 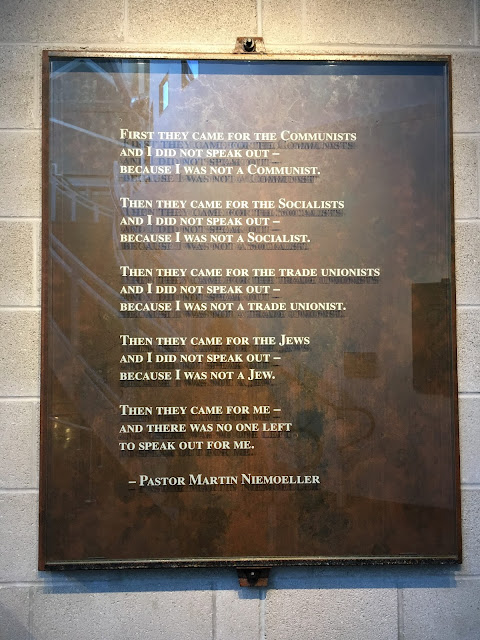 As I walked through the exhibit; reading the placards and watching the videos; the story couldn't help but sound so much like what is happening today with the bile and hatred and division that the 2016 presidential elections are bringing via the evil candidate called Trump and his followers.

At one point, I do not remember at what point in the history of things, one of the videos talked about how the German government basically voted themselves out of being a democracy and led the way for Hitler and his continued destruction.

A common quote going around facebook is: Hitler was not Hitler until he became Hitler. It is said that Trump is not Hitler ... and yet ... http://www.nytimes.com/2016/06/05/opinion/sunday/no-hes-not-hitler-and-yet.html

With the easy killings of black citizens and easy killings of police officers. With the hatred, ethnic cleansing, refugees, bombing of Seria, and I could go on. With the history of people who love others of the same sex and the struggles they have gone through. Better now but still difficult. How can people behave and think and perpetuate such evil on other people is not within my ability to understand.

Seeing the Auschwitz piles of thousands of dead, not just dead but skeletons with skin stretched tightly across their bones as a story of what they had been through before the panicked death in the gas chamber "showers." In many ways their deaths were merciful if only because of what they had been through emotionally, mentally, and physically ... but mostly unnecessary and cruel and evil!

This story, I know, has in various forms been going on since the beginning of time. That does not make it any better or any easier to embrace. Heaven help us all! 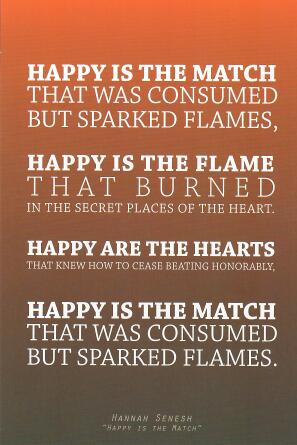 Posted by Michael Horvich at 1:31 PM