Only every now and then I need to process my thoughts on Donald Trump, the President and the man, and share them. I'd rather be having a delicious meal or watching an interesting TV show! But here goes: 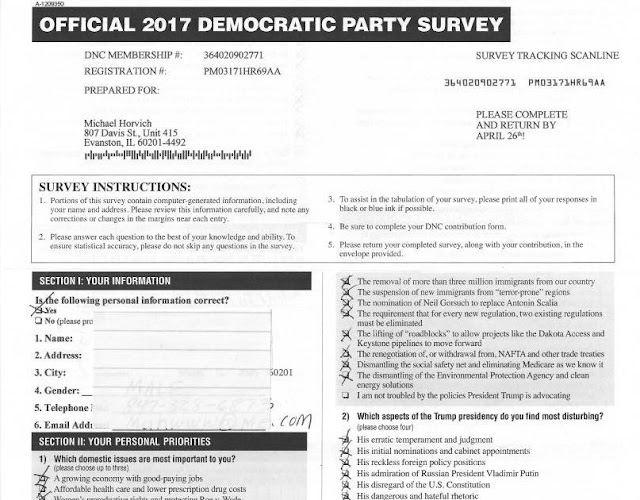 Just finished filling out the "Official 2017 Democratic Party Survey." In each area, it instructed you, "please choose up to three or four" or "Prioritize 1=most important 10=not as important."

I checked EVERY box or put a "1" on EVERY line. Whoever compiled this survey hit on EVERY thing about President Trump (the president,) Mr. Trump (the man,) and the Trump administration that I believe is not serving the best interests of the U.S.A. and that we need to be vigilant about and work at turning around!

For example, there is a large difference between "dumping" Obama care because it reflects "Obama" and FIXING the parts that need fixing.

But NO, DT and his people and his party (?) do not seem to be acting on behalf of our fellow citizens, but rather in knee jerk, self serving ways.

Another example, YES, tighten security and vetting of people traveling to the U.S. from Terrorist Known Countries, but why assume that all of them and all Muslums are Terrorists?

And why feel the need to deport immigrants, legal or illegal (hate that word when referring to human beings) when there could be a way to move them towards citizenship based on the good work they are already doing in the country. And most importantly NOT splitting up families! Of course criminals of any sort should not be free to harm others but being an immigrant does not automatically mean one is a criminal!

And if enough people feel that LGBTQ rights matter, based on the laws that have been passed and votes won; why tamper based on religious beliefs. If you do not believe, you do not have to - but you do have to respect fellow human beings!

Also, while this is a Democratic Party survey, I CANNOT and WILL NOT blame or assume that every Republican does not hold our interests in mind when making decisions, it just seems that right now there are precise few who are speaking out against DT,  are afraid to speak up, and/or seem outnumbered.

There is the possibility that DT might begin to approach thinking about our best interests, and he might have some really good ideas, but I do not trust the man for the attitude, behaviors, and actions he has so far taken. He has not changed much from the iconic lie telling, fact manipulating, self-serving, cry baby candidate we watched pull the election!

I am actually sending the Democratic National Committee my support of $25.00

Posted by Michael Horvich at 1:45 PM