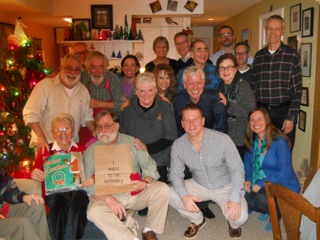 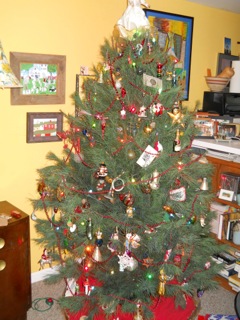 The Holiday Season never begins until the first Saturday in December at Roger’s annual Christmas Party. One is always able to count on a delicious home made dinner, home baked cookies, fond friends (some seen only once a year at this event,) and a festive atmosphere filled with love. On the “perfect each year” fresh Christmas Tree decorated with old fashioned lights, there are ornaments from his family that go back generations and from his many friends that go back a lifetime.

His home has added touches of Christmas everywhere. There is a bit on tinsel on top of a picture frame and small red and green foil boxes held in the arms of a Plaster Putti in the bathroom. There is a snow globe on the dining room table that plays music and a forest of various types of miniature trees on the shelf above his kitchen counter. On a folding table in a corner of the living room there is his family’s antique nativity scene and in the bedroom a second, foil Christmas Tree very much in the style of Charlie Brown.
Everywhere you look, there is love and Christmas and thirty or so people enjoying their time with Roger in the big sense of home which he has created in his small apartment.
Another tradition at the party celebrates his Jewish friends. In the beginning of this party, that goes back at least thirty or so years, since they never got to do it in their own home the Jews got to put the lights on the Christmas Tree, but based on a lack of experience with things Christmas, they usually did a very poor job of it. After many years of having to rearrange the lights after the party, Roger decided that this part of the tradition had to go!
Hanukkah dreidels, “gelt” in the form of gold foil wrapped chocolate coins, and the lighting of the Menorah have continued. By now the non-Jews have learned the blessing over the lighting of the candles and joyously join in the singing.
As I squeezed in to join the singing, Lisa tried to make room for me but there were so many people grouped around the Menorah that I told her, “I’ll just sing from behind.” Giggling, she said that my comment sounded like the title of a short story: “Singing from Behind.” This then is that story.

Posted by Michael Horvich at 10:46 AM