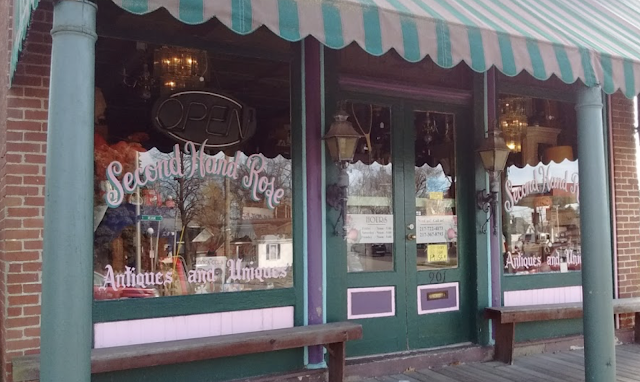 One of my hobbies is "collecting" and that is often best done at antique malls. Based on my long history of antiquing and collecting, I can tell if an antique mall will be worth the time, merely by looking in the windows or through the front door.

After that cursory evaluation, entering the shop and the potential success of the visit is confirmed based on the overall smell of the antiques, the visible number of dealers, and whether there is a balance between treasures being locked up in glass-front cabinets or freely displayed on shelves.

I have a technique for perusing such malls. Usually, I go clockwise in a room by running the first aisle, looking only at the booths on the left, and then returning down the same aisle visiting those on the right. Then I move clockwise to the second aisle and so on.

It is easy if the aisles back up to each other but sometimes it gets complicated if the cross aisles have booths on the cross-aisle itself. I make those decisions as necessary. Another logistics problem is when another room branches off the main one in no particular order. One can get disoriented in finding one's way back to the main room of the mall without having to visit any one booth more than once as well as making sure to not miss anything.

I can tell from standing in the aisle whether it will be worthwhile entering the booth itself. I stand at the head of the booth and scan the contents. If things catch my eye, I enter and spend some time looking around. If the items in the booth are mostly those which do not interest me, I do not even enter and move to the next booth.

If all of the items are locked up in neatly arranged in glass-front cabinets, I usually avoid that booth. I hate not being able to touch the items, especially if I am interested in them. It is a pain to have to call an employee over, tell them what you want to see, they go back to the front to get the cabinet keys, they return to unlock the cabinet. The rule of thumb is that you tell them what you want to look at and they get it out of the cabinet. Shoppers are not allowed to reach into the cabinet for fear of clumsily starting an avalanche.

If the booth is so loaded that it looks like it will be easy to knock things over or fall over myself, I avoid it. If the booth is already occupied by another shopper, I hold back. If it is being spruced up by the owner, I keep going as I do not like confrontation or after a lovely exchange feeling obligated to make a purchase.

On one Antique Mall adventure, the one over by the river which consists of "over 40 dealers," I came across a box of glass eyes somewhere in the middle of the shop. As I picked up the box, I assumed that they were for animal taxidermy purposes but on closer examination, I realized that they were replacement eyes, glass eyes, for people who had lost an eye and after medical examination would be fitted with an eye that they could "pop" into their empty eye socket so they would look more socially acceptable to others (and maybe to themselves.)

This particular booth was on the left middle of the third aisle. As I was coming back down the aisle, visiting the right booths, I notice an older man in the glass eye booth holding the box of glass eyes that I had just looked at. He was studying the box intently. Then he held it close to his face, mumbling to himself as he looked.

He put the box back on the shelf and proceed to touch each eye. There were large ones and smaller ones; brown, blue, green, and various shades in between. It was almost like he was having a conversation or a love affair with the box of glass eyes.

I continued my journey up and down the aisles, left and right, a brief stop at a cross-aisle booth then back to the up, down, left, and right. I found a few items to purchase and headed to the checkout counter towards the front of the mall. I paid for my items. They wrapped them carefully and handed me a small shopping bag with my purchased contents.

As I turned to go, I realized that the man I had observed earlier was behind me ready to make his purchase. Sure enough, he had the box of glass eyes, lid firmly in place, under his arm. What I had failed to notice the first time is that in his right hand he clutched a white cane. I will leave the rest to your imagination as it has been in mine.

Posted by Michael Horvich at 1:19 PM